Bobby Axelrod has long been the antihero we hate to love, but love all the same on Showtime’s Billions.

So as Axe’s war against smug fellow billionaire Mike Prince continued in Season 5’s back half, which premiered Sunday, we couldn’t help but root for Prince’s demise. In true Billions fashion, this would be no easy feat as Axe and his faithful sidekick Wags tried desperately to find dirt on the elusive megalomaniac.

Wags thought he’d found what appeared to be a gambling addiction for Prince’s second-in-command Scooter. Turns out Prince either really had the betting problem or he found a way to make it look like he did and Axe and company were back to square one. Eventually, Axe talked to Wendy, who told him to leave Prince alone because he couldn’t beat him. She added that he should go back to his past and find the rival he was actually angry with and destroy that guy.

That’s when Axe realized that he’d been looking in the wrong place when it came to Prince’s dirty fingernails, and Dollar Bill had the answer. Prince had screwed over a past business partner and surely the deceased man’s mother, who didn’t like Prince, would help them bring him down.

At first, the woman whom Axe flew out on his private jet was tight-lipped because she had signed an NDA. After giving it some thought, however, she spilled the tea — and it was so scalding hot that Axe was able to tank Prince’s TV profile and his hopes of becoming the ambassador to Denmark right along with it.

Chuck, meanwhile, had a far less victorious run in this week’s episode and, like Prince, had several ghosts from his past come back to haunt him.

A jilted former student found an incriminating photo from Chuck (that Axe planted) from his college days that could possibly ruin his career. Although Chuck had acted on the right side of history when he threw his college election, the whiff of contamination could make voters look at him differently. Chuck’s student offered a solution: resign as a professor at Yale and he’d do away with the photo. 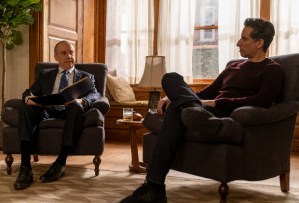 In the end, the student did not go through with his threat and it was Chuck’s abuse of student expertise that ultimately cost him the Yale gig. Chuck was equally unsuccessful when he attempted to use prison sentencing reductions in exchange for a healthy kidney for his suffering and dying father. What Chuck hadn’t counted on was Season 3 enemy Dr. Ari Gilbert popping up and vengefully blocking any and all plans for Chuck to get his hands on prisoners’ healthy kidneys.

Couple that with Catherine dumping Chuck — which was revealed in a conversation with his bestie Ira — and the fact that he accidentally helped Axe secure a banking license and, well, there’s no way to sugarcoat it. Chuck had a terrible, horrible, no good very bad episode.

What did you think of Billions Season 5B and was the installment worth the wait? Grade the premiere in our poll and drop your thoughts in the comments.