Falling in love with fictional characters is never quite simple. But on Netflix’s latest K-drama Hometown Cha-Cha-Cha, the two leads make viewers work for that love.

In the first installment, Hye Jin was the most lovable dentist. She fought for patient rights and quit her job after the owner of the dental clinic where she worked tried to gouge clients for services they didn’t need. She also mourned her late mother in a seaside town where she happened to help a little boy who had lost a tooth while playing with his bestie.

But by Episode 2, Hye Jin had moved to the town and turned out to be a low-key snob. She looked down on the food a grandmother offered her because she touched it with her bare hands, and she also insulted half the town by making rude comments about their small businesses. The worst offense came when she talked smack about the local musician, Chun Jae, because he seemed stuck in the near successes of his past.

No one in the town would’ve known how Hye Jin felt about Chun Jae if she hadn’t stepped into a small office near an event where the PA system and microphone were not only located but accidentally left on. Yikes. She quickly learned the error of her ways when she got off the phone and stepped outside where everyone at the event gave her stank eye, all except Chun Jae who was too embarrassed to look her in the eye. After that, no one wanted Hye Jin to be their dentist. 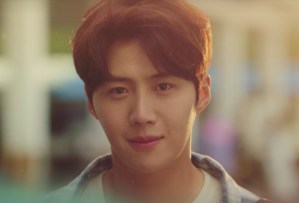 Thankfully, Du Sik, the town bon vivant, took pity on Hye Jin and Chun Jae and fixed the situation by coming up with a myriad of ways to help Hye Jin win over the town’s people. This included having Hye Jin hand out rice cakes for her dental clinic grand opening. Du Sik also assisted Hye Jin in bringing snacks to the town meeting and woke her up on clean-up day so she could lend a hand and make amends.

Du Sik, who clearly has sparks with Hye Jin, is no saint, either. He was rude to Hye Jin when they first met and spoke abruptly to her every time thereafter. Sure, he was helpful, but only in the gruffest of ways. Behind that rough exterior, of course, is a big old softie who gives grandmas piggyback rides into town when they sprain their ankles. He also sells real estate, is a carpenter and fishmonger and helps everyone he can. 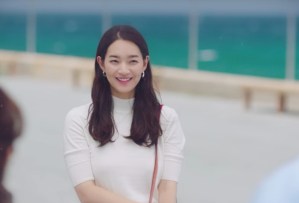 Like Du Sik said (and read in Henry David Thoreau’s book), one of life’s goals is to find the “flower and fruit of a man,” which basically means no one is all bad. Besides, Du Sik is a Leo, and thanks to that nifty flashback at the end of Episode 2, we know he’s been crushing on Hye Jin since they were kids. He just doesn’t know it yet.

What did you think of the premiere episodes of Hometown Cha-Cha-Cha, and are you rooting for Du Sik and Hye Jin to get together as soon as humanly possible? Grade the premiere in our poll, and drop your thoughts in the comments.