Cancel culture is one of the most prevailing parts of social media. And this Thursday on grown-ish, Zoey learned a cold, hard lesson about the virtual form of public flogging.

The trouble began at the end of last week’s installment when Luca took to the web to call out Zoey’s boss Esme for stealing her cropped letterman jacket design. Luca meant well, but by exposing Esme online and tagging Zoey in the post, he jeopardized the internship Zoey needs in order to graduate and turned Esme into a fashion pariah.

When Zoey attempted to do damage control by asking Luca to delete the tweet, someone took a screenshot, and the roar of internet outrage grew louder. Zoey doubled down on her faux pas and made matters worse by recording a live explanation video that caused followers to cancel her, too, for wrongfully dragging a fellow Black woman. Seriously, someone take away Zoey’s phone. 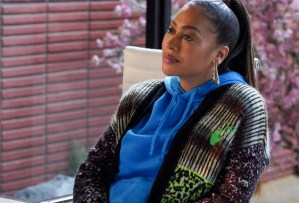 Of course, an embarrassed and enraged Esme was having none of this and basically figured out a way to fire Zoey. But before she left, Zoey gained enough courage to return to Esme’s office and demand her jacket and her design — and Esme obliged.

An excited Zoey ran to Aaron’s place to share the good news with the love of her life. Instead, the college senior grew frustrated as soon as she learned Aaron had yelled at Luca and nearly fought him for causing her personal and professional strife. Zoey reminded Aaron she doesn’t need Luca or him speaking on her behalf and sullenly went home. 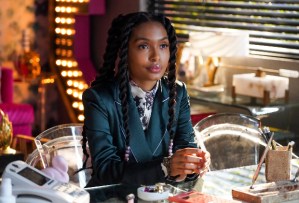 Ana greeted Zoey and congratulated her for standing up for herself upon arriving home, but also questioned what will happen when she’s unable to graduate without her necessary internship credits. Zoey, on the other hand, wasn’t the least bit interested in Ana’s words of wisdom and said she wanted to enjoy the part where she advocated for herself and got back her jacket and design.

Does this mean that Zoey won’t graduate, and that her relationship with Aaron is in peril, too?

What did you think of Zoey’s stand, and are you worried for #TeamZaaron? Drop your thoughts in the comments.