The final installment of David Makes Man Season 2 began and ended with water.

Tuesday’s sophomore-season closer, titled “Trouble the Water,” tracked David as he finally opened up to his family and girlfriend Nicole, got rid of the professional albatross that was causing him inner turmoil, and set things right with the Ville — the housing project he once called home. To get on the right side of things, David had to survive yet another nightmare where he was drowning.

A sweaty and disoriented David emerged from his bad dream to find his niece Trenise staring at him. She was still over at his place because she had run away from home. Trenise told David that his weird and awkward silences made it easy for her to talk to him. And David, who clearly knows he’s an oddball, warmly accepted the observation and told Trenise she can stop by and talk to him anytime she needs. She just has to call first, he said.

David took Trenise home, and an understandably upset Trisha cussed out David and Trenise and sent her to her room. She also asked David to leave and held onto the key fob he gave Trenise in case she needed to get away from her parents. Before going to her room and before David left, Trenise confessed she ran away because she was afraid her dad JG was going to leave her and her mom. JG sighed and looked ashamed, and a slightly relieved Trenise retreated. 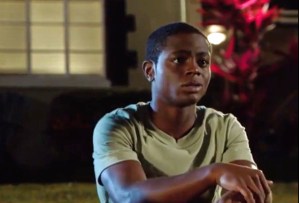 Departing proved much more difficult for Adult David’s inner child, who wanted to scream and yell at Trisha for not being more appreciative that he’d safely and soundly brought her runaway daughter home. But Adult David hugged his inner youngster and urged him to embrace his vulnerability instead of bottling up his anger. He also asked Young David to sit still with him and take deep breaths. The two laughed at Adult David’s attempts to meditate, and Young David asked his Adult version to get away from JG’s house before unpacking deep-seated fears from now on.

The next day, David helped Shella and other residents from the Ville advocate for themselves and fight against environmental and bureaucratic red tape. Mx. Elijah testified that they had used outdated fertilizer to grow plants on the property, all while making sure the substance never came in touch with groundwater. The testimony, as well as David’s apology to his former neighbors, helped convince the city’s board of commissioners to let the residents stay at the Ville, even as Joe Padilla renovated it. 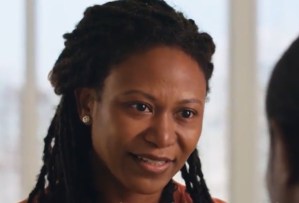 A satisfied David was then able to resign from Padilla’s soul-crushing company and spend some time with family. The victory felt short-lived when Gloria and Robin announced they were moving to a bigger and better place farther away. To sweeten the news, Gloria said she was giving her old house to JG and Trisha. She also gave Mx. Elijah her treasured mahogany armoire. Everyone was thrilled except David, who once again felt abandoned.

Later, when Gloria stopped by David’s place to give him her houseplants, David confessed he wanted Gloria to mother him in a way she hadn’t when he was a kid, and Gloria said she couldn’t. What she could do, she said, was apologize for not being a good mother in the past and love him with all her heart. Gloria also encouraged David to live his best life, and she would do the same because that is what peace and forgiveness allows. A newly freed David also spent quality time at an amusement park with Nicole. 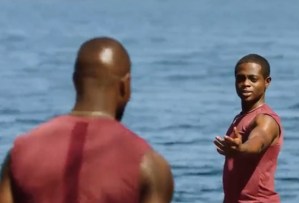 But the most essential quality time was spent with the two Davids, who playfully took a jog around the water before heading for liberation and walking in and on the water in red clothing just as the spiritual “Wade in the Water” commands. Does this mean David is the Messiah now? Hardly. But it does mean he is “free,” and if there is a Season 3, we’ll find out what his brand of freedom looks like.

What did you think of David Makes Man Season 2, and do you want any of the Davids to return for a Season 3? Grade the season in our poll, and drop your thoughts on Season 2 and its finale in the comments.