Warning: This post contains spoilers from Season 1, Episode 2 of The Hype. Proceed with caution.

When it comes to streetwear fashion, “appropriation” is a bad word. For years, the high-fashion world would steal ideas from street designers but never give them credit.

So one can only imagine the pushback that Caroline, a white contestant on HBO Max’s new streetwear design competition series, The Hype, received when she made an entire jacket out of red bandana material and added splashes of blue. (The first three installments of The Hype are now streaming.)

With this one jacket, Caroline unintentionally thumbed her nose at gang culture and street fashion as a whole, and rapper and guest judge Wiz Khalifa wasted no time respectfully but sternly cutting her down to size. Famous stylist and costume designer Marni Senofonte, who is a “cosigner,” or official judge on the show, also questioned Caroline’s discernment during the Episode 2 exchange.

“I thought the challenge was supposed to be more about who you are,” Senofonte said in earnest. But Caroline refused to acknowledge that she’d done anything wrong. She also mentioned that she knows rapper YG, so she can get away with mixing things up and taking bandanas to “different levels.” 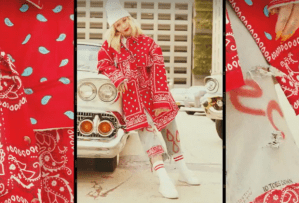 Offset, a rap star and another official cosigner on the show, argued that YG would never rock a red bandana intertwined with blue. The third and final cosigner, buyer and costume designer Bephie Birkett, wholeheartedly agreed, as did Khalifa.

“She got the red flag with the blue drips on there?” Khalifa asked in a concerned manner. “I don’t know.”

Khalifa did know, and soon, he could hold back no longer. “It wasn’t really considerate to the culture, if that’s what she wanted to do,” he said. “And there are ways to bring that together. But I think it just completely went over her head. Because in the streets, you gotta consider all that s–t.” 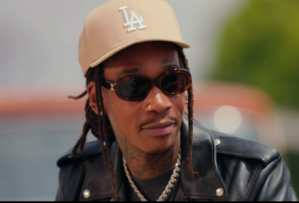 “You gotta be in the streets,” he added. “You gotta know people from the streets to be able to represent what they want, what they like and what they don’t like. And if you have no concept of what that is…”

Rikki Hughes, the Emmy-winning showrunner and executive producer behind The Hype, says one of the reasons she picked Khalifa as a guest cosigner is because she knew he would keep things authentic. She also describes Khalifa as a “thinking man” and “the Jimi Hendrix of hip-hop.”

That said, Hughes and others attempted to save Caroline from herself and Khalifa’s ire, but to no avail.

“As producers, we are in a position where we have to stay behind the fourth wall and allow the competition to play out,” Hughes tells TVLine. “But we also had to be mindful of everything that happened,” she adds. “There’s only so much you can put on the show.” 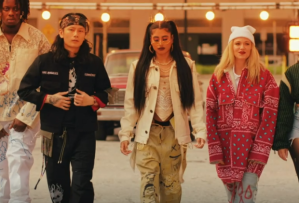 Hughes says that behind the scenes, people were telling Caroline to reconsider her choice, but she wouldn’t listen.

“They were like, ‘What are you doing? That’s not cool. You look crazy,'” Hughes recalls. “She was just like, ‘I’m down with YG, and I can do whatever I want.’ This was a choice that she made, so she had to live and die on that sword.”

Despite Caroline’s hurt feelings and her eventual elimination — which meant losing a shot at the $150,000 prize — Hughes acknowledges Caroline’s faux pas made for good TV.

“This episode is going to have a lot of controversy,” she continues. “My hope is that there is a lot of conversation about this, which is exactly what needs to happen. That’s what we do. We want to think. But her entitlement… was just fantastic.”