Back-to-back police killings of two unarmed Black men forced Doug to ditch his apathy on the latest episode of grown-ish. Even Diggy Simmons, the actor behind the character, questioned the role of social media during the racial reckoning because of the impactful episode.

“All of this was so fresh in our minds,” Simmons tells TVLine regarding the Freeform show’s Black Lives Matter story arc, which will continue when the collegiate sitcom airs this Thursday at 8/7c.

“We were only a few months out of the protests when we began to film,” he adds. “Like Doug, I was also dealing with a lot of questions that I had seen on social media. Is there a correct way to go about this regarding your trauma? Does posting more make you a better advocate? Or does posting less mean that?”

Doug opted out of social-media engagement and chose to throw an income-generating party with Luca instead of fighting the power last week. But the character did an about-face by the end of the episode and linked up with Aaron to protest in the streets. This week’s installment will show how that protesting goes. Nomi’s white fragility will also take center stage. For Simmons, grown-ish‘s timing is especially prescient.

“Our emotions as a cast were still very prevalent because the [Derek] Chauvin verdict came out the same day that we were actually shooting the protest episode,” Simmons divulges. “I’m just happy we were able to touch on such a nuanced subject in this way and give it its due justice.” 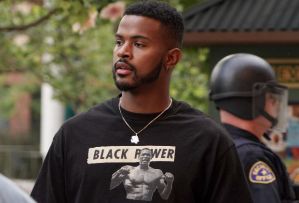 Jackson says he hopes that Episodes 5 and 6 further shake people from their slumbers and force them to talk openly and honestly about the social shift that happened after George Floyd’s murder.

“People shouldn’t be afraid to have conversations where there is a difference of opinion,” Jackson says. “So many people want to be affirmed by everyone else. But if you do that, you really don’t shift the needle.”