Katie seems to have a few relationships with real potential going on The Bachelorette — which, of course, means it’s time to shake things up!

Monday’s episode starts out with Katie pushing the guys’ boundaries on a wild group date that sees them eat a plate full of carbs (gasp!) and wax each other’s nether regions. But they didn’t leave the drama behind. Tre warns Katie about what all the guys have been buzzing about: Thomas can’t be trusted. He tells her about Thomas’ desire to be the next Bachelor, and that sends her into a spiral of self-doubt, since she liked Thomas so much. She rewards Tre’s honesty, though, by giving him the group date rose. 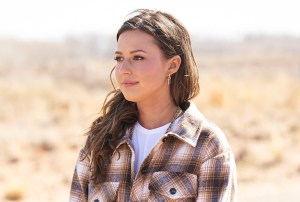 So Katie is at a real low point when Tayshia visits with a bit of news: One of her exes is interested in Katie, and he wants to join the competition. (She won’t tell us who, even though ABC totally spoiled it already in the previews.) Tayshia emphasizes that he has “good intentions” and is ready to get married, and he’s here to meet Katie. She’s a bit thrown, but she agrees and walks outside to meet… Blake, from Tayshia’s season! (Keep in mind: He started out as a suitor for Clare, then switched to Tayshia when she replaced Clare. So this is the third Bachelorette he’s pursued on camera. But he only has good intentions!)

Katie is surprised to see him, but they have chatted before on social media, and he lays it on thick, complimenting her on her boldness and her playful sense of humor. She says he’s “a very handsome guy,” but she does have a few other men here already that she likes a lot, and bringing in Blake could ruin what she has with them. She tells him she has to think about it before she makes a decision, and she puts a pin in all of that to deal with the Thomas situation. 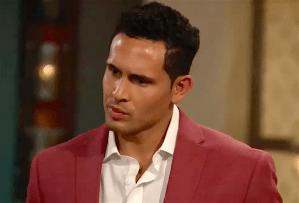 After a quick consult with Kaitlyn and Tayshia, she sits down with Thomas, who doesn’t appreciate his character being “demonsterized” (??). He says he’s going to stay and fight for her… but he does admit he pictured himself being the next Bachelor. He tries to say all the other guys thought the same way, but she cuts him off: “I can say confidently that there are men in this house who have zero intentions of ever being the Bachelor here.” He scrambles — and even offers to sign something saying he won’t be the next Bachelor! — but she won’t commit to keeping him and leaves it for the rose ceremony.

When Thomas walks back in, the other guys get on him about stealing their time with Katie, and it escalates to shouting just as Katie walks in. So the cocktail party gets off to an awkward start, and it continues that way, as most of the guys use their time with Katie to slam Thomas. Michael A., though, keeps it just about them, and she confesses she has “feelings” for him before they kiss. Soon it’s time to hand out roses, and before Katie can hand out her first one, Thomas offers a meek apology to her and the group. She leaves him dangling until the final rose, and then she calls his name, stunning the other guys… but she only did it to tell him he’s “selfish, unkind and a liar. Your Bachelor audition ends tonight. So get out.” The guys are thrilled… but they won’t be once they find out Katie took that final rose and gave it to Blake.

So do you think Blake deserves a chance to win Katie’s heart? Vote in our poll, and then hit the comments to share your thoughts.