Dave is back on FXX, and yes, he’s still embarrassing himself. But now, he’s doing it on a whole new continent! And in front of mega-famous supermodels!

The first half of Wednesday’s Season 2 premiere finds the aspiring rapper in Korea with manager Mike and hype man GaTa, presenting a Korean music award — he tries to point out BTS in the crowd, but oof, it’s not them — and getting ready for his first big music video shoot. He’s lined up Korean pop star CL to appear on the track, and he even has a Korean intern named Dan (played by Kimmy Schmidt‘s Ki Hong Lee) to fetch him weed. (Dan actually grew up in Pomona, for the record.) But Dave is stressed out: He’s feeling the pressure of recording his first album, and CL barely has time to take a selfie with him. When he gets back to his hotel room, he just screams into a pillow. 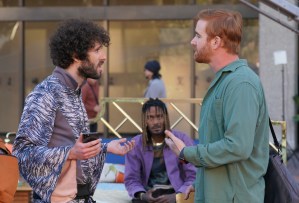 At the music video shoot — it’s for a K-pop-inspired tune called “I Just Woke Up in Korea” and involves lots of dancing and, um, pooping — Dave starts to worry about the optics of what they’re doing: “We’re in a f–king race war back home. Everything matters.” He’s also worried that CL hasn’t shown up yet, and thinks it might be because his selfie with CL had GaTa smoking weed in the background. (Marijuana is highly illegal and frowned upon in Korea.) They’re short on time, so they hop on the Korean subway to find CL. Mike only adds to Dave’s stress when he tells how he read that K-pop stars are controlled by their managers and it’s all run by the Korean mob — and then that stress level goes through the roof when cops get on the train and haul Dan away. He has Dave’s laptop with the only copy of all of his songs on there!

Dave hops in a cab with Mike and GaTa, and despite lots of yelling and a near-discovery of their weed stash, they manage to use Dave’s phone to track the laptop to the local police station. It’s awkward when they ask Dave to describe Dan: “Facially, he’s an Asian man.” But they do find Dan in a holding cell, where he says the authorities think he dodged his compulsory military service and he might not be able to leave the country. Mike gently asks for the laptop, and Dan explodes on him, railing against their “offensive f–king video,” and there’s lots more yelling until Dave breaks down and confesses: There’s nothing on the laptop anyway. He’s had crippling writer’s block, and he hasn’t written any songs for his album yet. 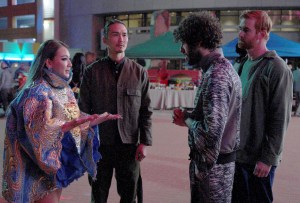 On the subway ride back, Dave admits the Korea song is the only one he has, but GaTa encourages him to shoot the video anyway. (They’re already in Korea, after all.) Back at the shoot, CL is there, and when Dave spots her standing on the ledge of a rooftop, he thinks she wants to kill herself and tries to keep her from jumping, but she does — and lands on a huge cushion. That was just CL’s stunt double, and it was for the video. Also, CL did arrive on time; Mike just mixed up the time zones. But she walks out anyway, now that she feels like Dave is disrespecting K-pop. “Now I have nothing,” Dave concludes. 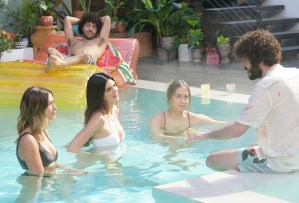 The premiere’s second half finds Dave back in L.A., but still coming up empty creatively. (He actually Googles “what do people make songs about.”) He complains about an ant infestation at the swanky house in the hills the label rented for him, and he commits to an April Fool’s Day album release date — even though he still has no songs. He even has a dream-like encounter with Kendall Jenner and Hailey Bieber in Benny Blanco’s pool, where Kendall politely shoots him down: “I love you, but no.” (Did this actually happen, or is it just in Dave’s neurotically twisted mind? You make the call!)

But really, Dave’s main problem is that he’s still hung up on his ex Ally. He freaks out when Elz invites him to a party, worrying he might see Ally there. He bugs Emma for information about her and immediately humiliates himself at the party… in front of L.A. Laker Kyle Kuzma, no less. Dave thinks he sees Ally outside, but really, it’s just a girl who looks like her. He takes the girl home anyway and, in just a heartbreaking moment, tries to recreate the Auto-Tune magic of his song with Ally, but this girl is clueless and doesn’t get it at all. At first, he kicks her out and resorts to pleasuring himself via virtual reality — but then the timeline backtracks, and this time, he takes the faux Ally upstairs.

Are you feeling the new season of Dave so far? Give the premiere a grade in our poll, and hit the comments to share your thoughts.