To fully appreciate the love fans of The Equalizer feel for Aunt Vi, just hop on social media where viewers tweet Lorraine Toussaint, the actress behind the character, countless posts filled with accolades and admiration.

Those same fans will be thrilled to know their favorite ancillary character will have more to say and do when the vigilante drama airs this Sunday (CBS, 8/7c) and features a subplot with Aunt Vi looking for love on a dating site.

“As the season goes on, we get to see more and more of Aunt Vi’s backstory and a bigger vision of her, including her dating life,” Toussaint excitedly tells TVLine. “She’s a Bohemian kind of well-traveled sort of girl. She dates men, she dates women, she’s very open about her sexuality. Aunt Vi was probably a roadie.

“She rolled with some rock ‘n’ roll bands and she’s probably had several marriages that we don’t know about yet,” Toussaint adds. “She’s done everything from traveled with her guru in India to being a roadie for Sting back in the day.”

Aunt Vi is also the voice of reason in Robyn McCall’s (Queen Latifah) house, which features three generations of Black women. She’s a shoulder to lean on and the one Robyn’s daughter Delilah (Laya DeLeon Hayes) calls when she’s in a jam.

“Vi is a wonderful kind of modern-day Auntie Mame,” Toussaint says, referencing the 1958 film. “Every child needs an Auntie Mame like Aunt Vi. She’s the one who, at times, may have questionable maternal instincts, but she’s fun and you can talk to her about anything. There’s a kind of unconditional loving that comes from Aunt Vi that can’t necessarily come from Robyn. 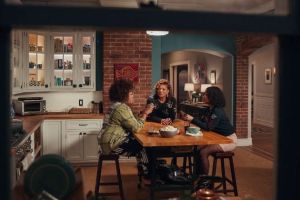 “I love this household and I kind of grew up in a household like this and I get the joy of it,” she continues. “Sometimes it’s difficult to navigate triangles in families but that also makes for good drama. Fans have been asking for more Aunt Vi and they are going to see a lot more of that. She always has Robyn and Delilah’s backs and she often offers words of wisdom.”

It’s a type of wisdom that helped the SAG Award-winning actress, whose career spans nearly 40 years, stay grounded and loved when she was growing up, she says.

“My mother was divorced and I was raised by several generations of Black women,” Toussaint shares. “I’m divorced and my daughter is also being raised by a village of Black women. I think, especially now, seeing nontraditional families is very important. But also, in light of all of the current events, so much of the DNA structure of Black families has been criticized and villainized and oftentimes, those matriarchal homes are quite normal and nurturing within the Black community.

“It’s nice to show that Delilah’s dad is very much involved in her life, clearly,” she adds. “But this is our family unit and it’s familiar to what happens in the Black community.”

Elsewhere in Episode 7, titled “Hunting Grounds,” Robyn races to locate a marginalized Black woman kidnapped by a serial killer the police failed to connect the dots on and take seriously. The search also puts a strain on Robyn’s working relationship with Det. Marcus Dante (Tory Kittles) when things don’t go as planned.

“There are some big shifts that are coming in the next couple of episodes and fans are going to be very, very surprised,” Toussaint teases. “And these changes are going to really turn this little household upside down. There are some really fun things coming down the pike so this is the time to stay tuned. And we’re coming back for a Season 2, and that gives a certain amount of freedom with our storylines to go even further with what might normally happen in most first seasons. It’s not going to be wrapped up in a pretty little bow. Not at all.”

Scroll up to check out an exclusive sneak peek of Aunt Vi getting her dating groove back.