Adam Levine is a man of few words — at least when the subject is whether he’d return to The Voice, the NBC sing-off on which he served as a coach from its debut through Season 16. During an Instagram Q&A session with his fans Monday, the Maroon 5 frontman was asked if he might reclaim his red swivel chair.

His response: “No thank you?” 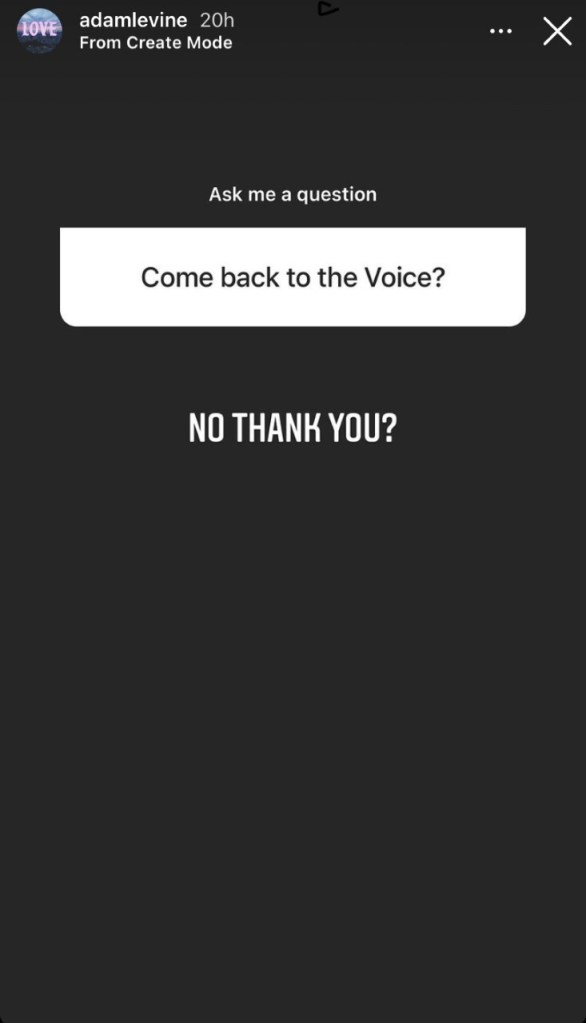 You’ll recall that Levine, thrice the reality show’s winning coach, parted ways with The Voice after not one of his team members advanced to Season 16’s Semifinals. (In subsequent seasons, changes to the rules have ensured that each coach still has a horse in the race at the end.) A season prior, he had come under fire for showing favoritism to a contestant who had been too ill too perform (to the detriment of her teammate, who had gone on).

Though Levine doesn’t appear to have any intention of rejoining the coaching panel, at least he still seems to enjoy playfully poking fun at his longtime sparring partner, Blake Shelton. When elsewhere in the Q&A, a fan asked Levine, “Did you miss Blake on The Voice last season?” the rocker quipped, “Blake who?”

Levine was just getting started, too. It almost seemed like old times when he was asked, “Which of Blake’s [albums] is your favorite?” Doubling down on the mischief, Levine replied, “Who is this Blake you speak of?”

Finally, when asked, “Do you think Blake also being [named] the sexiest man alive was a People downgrade?” Levine cheekily responded with a big, red, underlined 100 percent.

What do you think, Voice fans? Would you like to see Levine return to the fold? Or are you looking forward to Nick Jonas’ comeback in Season 20? Hit the comments.