While Lucifer dealt with his own struggles during the first half of Season 5, the demon Mazikeen spiraled into her own private Hell, discovering among other things that her mother, Lilith, has been living on Earth for decades — and that the Devil himself knew.

That bombshell, coupled with wounds still to be licked over not being invited back to Hell, and her seemingly hopeless search for a soul, led Maze to be arguably as ferocious as ever, ultimately allying with Lucifer’s twin brother, Michael, in the midseason finale’s super-celestial clash.

TVLine spoke with series vet Lesley-Ann Brandt about Maze’s rough Season 5 thus far, where her feud with Luci stands, and how her own encounter with the Almighty will go when Season 5 resumes… at some point.

TVLINE | Is Lilith and her story something that you’ve been asking to explore?
I think that probably came out of two things. One, there was an opportunity to tell that story when Netflix extended [Season 5 with] the extra six episodes. Also, I do think that the writers pay attention to what is being said on social media, and that backstory for Maze has always been something that has been discussed amongst fans of the show. So really, the opportunity presented itself and then the noir [episode] sort of fed into this really great chance to try something completely different and challenge us as actors, too, because we rarely get that opportunity to play other characters in such a way, five seasons into a show. 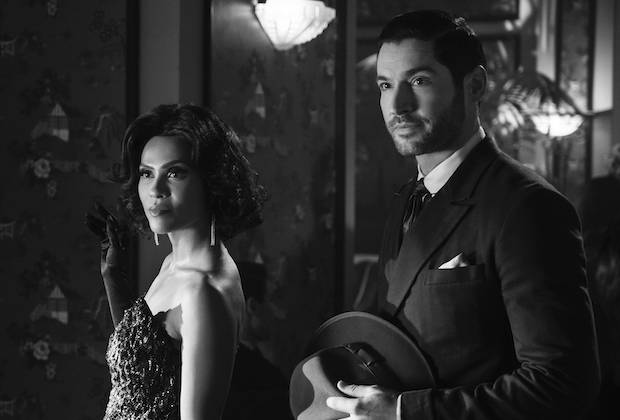 TVLINE | I was going to say, you could not have expected that you would be playing Lilith once they got around to her story.
No, no, and I was really happy to sink my teeth into something different, because while they’re related, obviously it’s a different period, and they sound different, and how they move is very different. Like, Lilith is way more feline in her movements whereas Maze is a bit of a bulldozer [Laughs], so to be able to take on that period and the language and obviously sing was a lot of fun. I love a challenge.

TVLINE | Were you surprised at all by how “soft” Lilith was, as Lily Rose?
I think that maybe speaks to the women of the time, you know what I mean? Like Maze, she’s had to be a bit of a chameleon when living amongst human beings and being on Earth, so I think she adapted. I always think of myself like that, like as an immigrant you kind of adapt your accent so people understand you better, you try and understand the culture, all while never losing yourself. And I don’t think Lilith ever lost who she is. She’s the mother of all demons, but she also had found a way to have a life as that demon, and in that episode she is exploring in a parallel storyline the discovery of humanity and understanding how humans operate and what makes them so special. That is very similar to what Maze went through in Season 1 and 2, through forging her relationship with Linda and Trixie and Chloe, so the decision to then leave it all behind is a very brave thing to do. To take a leap of faith, if you will, and sadly for her it didn’t work out. I don’t think she had a Chloe and a Linda, I don’t think she had that support system. 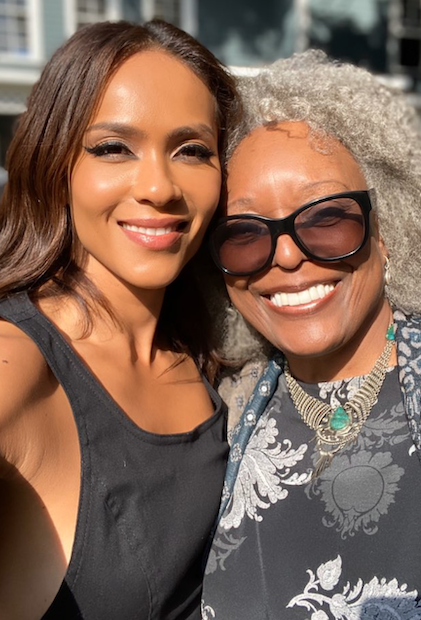 TVLINE | I was excited when I saw L. Scott Caldwell (Lost) in the credits… but what a tease, you only had that one, and not a very friendly, scene with her.
I know. She was so lovely and she’s such a great actress. That was a very tough scene. We had takes where it was a lot more venomous and she and I explored, “What’s the range here?” Like, what does a child do in the moment when she confronts a parent like that, given how we often idolize our parents in that “they can do no wrong.” But I think that as you get older, you come to understand that your parents are human and they make mistakes. They don’t always get it right and they’re doing the best that they could in the situation that they have. But seeing the faults in your parents for the first time is sometimes very hard.

TVLINE | I read your choices as “Yes, Maze has her beefs, but she didn’t want to be a total dick to Mom.”
Exactly, because I think there’s still a yearning regardless of how much a parent, or particularly a mother, has done wrong. She was in her way trying to be like, “I don’t want to come at you hard, but I also want you to let me know why is this a theme in my life.” Like, my mother abandoned me, Lucifer abandoned me, Chloe abandoned me, Eve abandoned me…. What is it about me? Help me understand why people keep doing this. And Lilith had nothing to offer.

But I have a lot of empathy for Lilith, because as she says in that scene with Linda at the bar, “I don’t love people in that way because I don’t want to get attached in that way, and that means I protect myself.” Being kicked out of the Garden of Eden was her first real experience of betrayal and hurt, and for women like Mazikeen and Lilith, and strong and tough women in general, there’s such a expectation from the world that they can just sort of “take” things and handle it. But everyone has their limits and everyone gets to a breaking point, and I think this is a consistent theme wIth Mazikeen right now. When you track her storyline, regardless of how poorly Lucifer treated her, she always comes around —  I know you betrayed me, but you need me to help Chloe. I know how much she means to you and she means a lot to me, too, so I’m going to be there to help her. But I think this is the beginning of her drawing really clear boundaries for herself, and it’s why she ends up with Michael, saying, I think he’s a dick, too, and I don’t like him, and I don’t trust him necessarily, but a part of me is still drawn to this idea that he can offer me a soul, and I don’t want to end up like my mother and I don’t want to be alone. This place has changed me in ways I couldn’t have imagined from the pilot, but I have to figure out how to survive here and not lose myself, and so a soul is what I think I need in order to do that — and you are the means to and end for me.

TVLINE | Have you thought about what Maze would look like with a soul, how you would have to play her?
I think I’ve maybe seen the beginnings of that? I don’t know. I thought about that when I was going through this season, because I kind of found myself judging how emotional she was — even for me as the actress, because there would be tears coming out where I didn’t necessarily think there would be. When I worked on my preparation for the scenes, that was just organically there, because we’re talking about family relationships, we’re talking about watching Linda potentially make the same mistake…. That is real care to protect her friend, in her weird demon Maze way, from making those same mistakes.

So I don’t know that she gets enough credit for that. To show that vulnerability, to break down those walls for someone like her is incredibly difficult, and I also don’t think that people realize how deep a scar can run and what it takes for someone like that to get over it.

TVLINE | I was reading about how Tom [Ellis] had to film the midseason finale’s fight scene twice, once as Michael and once as Lucifer. Did that mean almost double the work for you as well?
No, because when we’re shooting in one direction, whether it’s with Michael or Lucifer, that just means that I’m either working with Tom or I’m working with his double. He actually had two doubles — a double for himself, and then he had a double for Michael. So when Michael was fighting Amenadiel and I was fighting  Lucifer, we would need to have the double in Michael’s gear in the background while I’m kicking Lucifer’s butt. I mean, hats off to our stunt coordinators because they really did plan that so well.

TVLINE | It was so good.
I know. I had just landed back from Brazil on Sunday and we shot that first scene Monday morning, so I was like, “Oh God, I am so exhausted and jet-lagged and we rehearsed this two weeks ago, do I still remember this?” But the beauty of our stunt team is they’d shoot a previs (CGI previsualization) which is like a “blueprint” for the director, and if you’re smart like [director/castmate] Kevin Alejandro, they’re literally giving you your angles to sell every single punch, kick, whatever, right there.

TVLINE | You were probably so tired that when Maze got knocked to the floor, you were like, “Let me just catch a little nap here.”
I know. The fight is like 99 percent me and then there’s two big hits that my stunt double did, because I always like to give the directors many usable takes so if it’s my face in frame you can use it.  I love that sort of stuff. I think the physicality of Maze is a big part of who she is, so I really do like to tap into that. 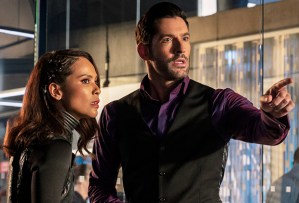 TVLINE | I told [showrunners] Joe and Ildy that I’m worried about Lucifer and Maze moving forward, because she’s been pretty angry at him all season.
Yeah. Yeah. Well, like I said, he’s her oldest friend, they’ve been through so much together and she’s come to understand and made space for Chloe, you know? But there’s an unspoken rule about betrayals and truths, where you just don’t leave and go back home and not tell your friend. You just don’t leave her [on Earth] when her heart is literally split in half, if you care about her in the way that she needs you to.

And that lie about her mother being around, it’s like you’ve kept something from me that I didn’t even know I needed, and I’ve literally had five seconds to digest all of this. So moving forward, there’s definitely tension, and it’s probably the biggest thing that they have to work through as friends. I’ve read a lot of fans going, “Oh, I’m pissed off, Maze is betraying him again and betraying him again….”

TVLINE | No, I can see her point of view.
Yeah, because think about what Linda said. He’s a narcissist, he thinks about himself. He makes decisions without her being a consideration, and she’s literally tired of it. She’s bared her heart and soul to him in regards to their relationship, so now she’s basically like, “I’m in it for me, and I’m sorry people are going to get hurt but I have to do what I have to do to get what I think I need.”

TVLINE | What’s Maze’s take on God (played by 24‘s Dennis Haysbert)? Is there a respect there?
Yes, there is. Absolutely. I have a great scene in the back half of the season with Dennis and it’s incredibly…. Well, you get to see my demon face in that scene, I think I can drop that in there!