It’s Kevin’s birthday this week on The Chi, but the viewers are the ones who get the best gift: clarity on the man holding holding Kiesha captive.

As some of you correctly guessed after last week’s episode, the sicko keeping Kiesha in his basement is the same guy who put the cash in the jar at Perry’s Pizza right after Kevin punched that kid a few weeks back. But why he decided to nab the track star is still up in the air: Aside from a horribly misogynistic memory he shares during the hour, we don’t get much closer to finding out his motives. But Kiesha is still alive by the end of the episode, which is at least a little encouraging.

At the beginning of “Woo Woo Woo,” we see Kiesha and Kevin getting breakfast on his birthday. At first, it seems like maybe a flashback to last year, but then they talk about her heading off to school soon, so it’s definitely not old. They’re smiley and easy with each other, and she gives him a scrapbook to remind him that “it don’t matter how old you get. You’re always gonna be my little brother.” Then the diner’s staff comes out with candles in a giant stack of pancakes, singing “Happy Birthday.”

Cut to Kiesha, forlornly coloring a picture of the pancakes while handcuffed to her bed in the kidnapper’s basement. The diner daydream was just that: a fantasy. She writes “Happy birthday bro” at the bottom and cries. Then her kidnapper enters and makes her sit in front of him while he brushes her hair, murmuring about how she’s a “nice” and “clean” girl. Ewwwww. A knock on the front door draws him away: It’s Ronnie, asking about whether he heard anyone screaming the night before. The man said he did, but has no info, then Ronnie asks if he can come in and use the bathroom. The man is hesitant but eventually relents.

While Ronnie’s on his way to the loo upstairs, he surreptitiously looks around for Kiesha. Downstairs, she screams her head off, hoping that whoever is in the house will hear her. Though Creepster McPervface likely soundproofed the basement, Ronnie hears something through the heating ductwork. And when he asks the kidnapper about it, the guy is about to bash his head in with a track-and-field trophy. But then Ronnie pretends like he must’ve been confused, and the man lets him leave (and live).

Later, downstairs, the kidnapper is very angry that Kiesha tried to solicit help. As he paws at her hair, he says she reminds him of his first crush, who rejected him when he asked her out on a date. As he recalls how the woman in question then “started serving it up to” all the guys at their school and wound up pregnant and on welfare, he angrily snips at Kiesha’s hair while tears run down her face. “I couldn’t save her,” he says. “But I can save you.” 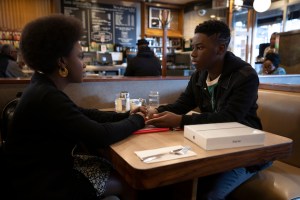 Meanwhile, Jemma takes Kevin rollerskating and then out for pancakes for his birthday and gives him an iPad. But he gets very angry when she admits that she told her mom about Kiesha’s disappearance, and her mom shared the info with others, so people at their school now have made the connection between Kiesha and Kev. He leaves the pancake place without eating and eventually heads home, where Dre — with the help of Jake, Papa, Maisha, Emmett, Tiffany and a very grateful Nina — has planned a little surprise party for her stepson. But just before Kevin arrives at his door, he gets a call from a blocked number.. though the person on the other end doesn’t say anything, and Kevin eventually hangs up.

What we know but Kev doesn’t: The call was from Kiesha, who promised to be a “good girl” if her kidnapper would just let her hear her brother’s voice on his big day.

* After Douda’s own mother endorses Camille Holloway, Rose defies her husband’s wishes and pays the older woman off in order to buy her silence from there on out. Of course, Douda finds out and got very mad. But he also deploys a tactic of his own: In an interview, he calls his mother “mentally ill” and vows to make mental health a focus of his campaign. Then he plays some potentially damning audio of Holloway mocking churches in low-income neighborhoods. Oh, it’s on! 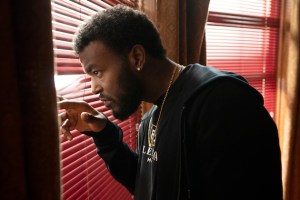 * Trig and Jake spend the day together, looking for a large amount of cash Reg allegedly stashed in his house. They eventually find it in an abandoned building… which is also where one of Douda’s men tries to get the jump on them. Trig beats him senseless first, then tells Jake the truth: Douda killed Reg, via the Wild Boys, and Jake’s got to pick a side: “It’s either him or me. Who’s it going to be?”

* Ronnie takes Ethel out for a day at Foxxie’s, the jazz club she used to run. Well, it used to be a jazz club. Now, it’s an all-male revue. But she rolls with it and eventually has the entire place sitting in rapt attention as she reminisces about the greats who played on her nightclub’s stage. “We was just happy to be Black and far away from the South,” she says, holding court. “It was the only place Blacks could be free.” Ronnie brings her back to the nursing home and gets her settled in bed, then realizes that she’s passed away while he had his back turned. He sobs by her bedside.