A winner is declared in The Politician‘s Season 2 finale… but that’s far from the end of the story.

While a pregnant Astrid and Alice milk sheep and sort buckwheat grains at a hippy-dippy commune — they eventually flee, and Astrid has an abortion — Payton and Dede practice their rock-paper-scissors strategies ahead of the big tiebreaker. Payton has his method down cold, while Dede is still fumbling with hers. To clear her mind, she and Hadassah go out to a bar for a drink… and find Payton there playing piano and singing. (And he’s good!) The two rivals share a laugh and exchange compliments after a hard-fought campaign. Dede is impressed by her young opponent’s passion, and when he sings “Corner of the Sky” from Pippin for them, she is moved to tears. 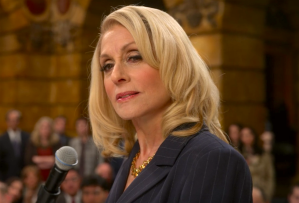 On the big day, before the rock-paper-scissors showdown can begin, Dede takes the mike and assures her constituents she hears them: “I am a great listener.” She understands that young voters are angry, and admits: “They finally had a candidate who inspired them.” Then she turns to Payton… and concedes the election to him! It’s over! Payton wins! She congratulates a shell-shocked Payton, hugging him and whispering: “The hard part starts now.” Later, Payton basks in the victory — and the fact that he never turned in that uncounted ballot box. Alice, meanwhile, is going back to Harvard to study to become a surgeon: “It’s that, or start a lifestyle brand. I haven’t decided yet.”

Dede gets a FaceTime call from Georgina, and the two day-drink together as Georgina enjoys her landslide win in the California gubernatorial race. (“Can you believe that nobody told me you have to move to Sacramento for the job?”) After a year, she’s resigning, though, to run for President… and she wants Dede to be her VP. Back in New York, Payton prepares for his first big speech as state senator and gets a boost when McAfee reveals they actually counted the votes in that stolen ballot box — and Payton would’ve won anyway! He gives a rousing speech, offering an olive branch to Dede’s supporters and tells those passionate about climate change that if he ever disappoints them, “you vote me out.” Then we get a title card: “Two Years Later.” Ahhh! It’s happening again! 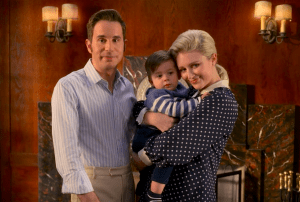 Yes, we get another time jump, and Payton is now running unopposed for reelection after notching a number of key accomplishments in his first term. Alice is almost a doctor, their son Archie is a happy toddler, McAfee is engaged to some new guy… and Payton has no intention of running for higher office. “A meaningful life is not all about ambition,” he says, raising a glass “to two more years.” Ah, but while he’s jogging, he’s tracked down by Hadassah, who leads him to a covert meeting with Dede. Georgina won the election, which means Dede is Vice-President, and since Georgina will only serve one term, Dede will be running for President… and she wants Payton to be her VP.

Payton has some understandable quibbles, primarily: “Don’t I have to be 35?” Dede assures him that “we’re gonna change that,” as part of Georgina’s “Let’s Fix the Dumb S–t in the Constitution” campaign. Dede wants to know if he’ll say yes, and Payton has a vision of River jogging by as he turns to Dede… and smiles.

Alright, it’s time to vote: Grade The Politician‘s Season 2 finale — and Season 2 as a whole — in our polls, and then hit the comments to share your thoughts.