Brooklyn Nine-Nine‘s Santiago siblings will reunite this summer, albeit in animated form.

Pop TV has announced that Lin-Manuel Miranda has joined the voice cast of One Day at a Time‘s animated special, which is set to air on Tuesday, June 16, at 9:30/8:30c. He’ll be joined by B99 sister Melissa Fumero and three-time Grammy winner Gloria Estefan, both of whom previously appeared in ODAAT‘s Season 3 premiere.

As Brooklyn Nine-Nine fans will recall, Miranda guest-starred in a memorable Season 6 installment as David Santiago, brother (and rival) to Fumero’s Amy. The Hamilton creator was one of a handful of famous folk — also including Seth Meyers, Mark Hamill, Sean Astin and director Guillermo Del Toro — who voiced their support for B99 following its cancellation at Fox.

The ODAAT special, titled “The Politics Episode,” will center on Penelope’s conservative cousin Estrellita (Fumero), Tia Mirtha (Estefan) and Tio Juanito (Miranda). They come to visit (and ultimately butt heads with) the Alvarezes in the lead-up to the impending presidential election.

One Day at a Time was one of the 100+ shows that was forced to halt production in March due to the coronavirus pandemic. All told, six out of 13 episodes were filmed prior to the shutdown. The one-off animated special will be fully executed remotely, with the cast set to record their dialogue from their respective homes.

The Netflix transplant’s midseason finale aired on April 14. The first half of the relationship-heavy Season 4 featured Penelope reuniting with Max, Schneider and an expectant Avery moving in together, and Alex entering his first romantic relationship with new girlfriend Nora. Meanwhile, Elena and her “Syd-nificant other” Syd agreed to remain a couple when they head off to college.

Scroll down for a first look at the extended Alvarez family in cartoon form, then hit the comments with your reactions to the animation style. 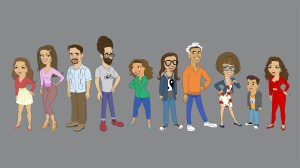