The Sinner finale stages an epic showdown between Bill Pullman’s Detective Harry Ambrose and Matt Bomer’s Jamie Burns — a showdown so terrifying that it leaves the survivor permanently scarred. 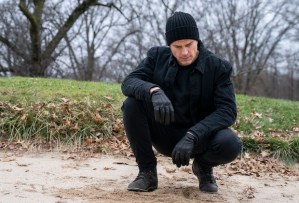 Season 3’s mind games culminate in a truly sickening turn of events. After Jamie kills Morris, he makes sure to leave one last paper fortune teller in the captain’s jacket pocket, in an envelope marked for Ambrose. The detective opens the first flap and finds Morris’ name crossed out. Other names that aren’t crossed out are Sonya, Melanie and Eli.

Now it’s clear: Jamie intends to go after everyone Ambrose holds near to his heart.

After he leaves he scene of the crime, Jamie goes to Eli’s karate class to retrieve the 10-year-old and bring him back to Grandpa’s house. He then forces Eli to stay put when he heads up the road to visit Sonya. The artist was warned by Ambrose to pick herself up and leave before Jamie got to her, but she didn’t listen. Instead she has chosen to stay behind and wait for Jamie. She has convinced herself that she’ll be able to get through to him, through the darkness and the deep psychological trauma, and convince him to end his killing spree. But Jamie is too far gone. He gets up from the table and brandishes a large knife. He moves towards Sonya and eventually topples her. On the floor, Sonya puts up a fight for as long as she can, but Jamie ultimately dominates her; he’s determined to cut through flesh. Fortunately, the police arrive in the nick of time and Jamie runs out the back. The cops then escort Sonya to the local precinct, where she pleads with Ambrose not to confront Jamie on his own. (“He’s a drowning man and he’ll pull you under,” she says.)

Meanwhile, an on-the-lam Jamie hides out in the woods until nightfall, then sneaks back to the home he shared with Leela. He stands outside and shares a silent goodbye with his wife. They line their hands up on the glass door that separates them and share one last embrace. Eventually their eyes meet, and Jamie nods. They’ll never see each other again. He leaves and returns to Ambrose’s house, then alerts Ambrose to Eli’s whereabouts. 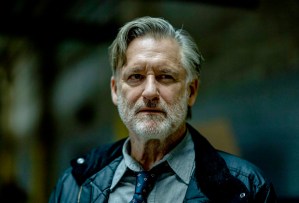 An armed Ambrose shows up and spots a scared Eli through the window. Jamie then surfaces from behind and knocks Ambrose to his feet. He grabs the detective’s gun and forces him to come inside. He has him sit Eli facing the window with noise-cancelling headphones on, then hands him another fortune teller. “There are only four answers there,” Jamie explains. “Three of them say Eli lives, one says Eli dies. We play just once. One in four chance. Fair enough, don’t you think?” But Ambrose refuses to play the game. He tries to talk Jamie down, but the gun-wielding psychopath who stands before him is done talking.

“You know what your problem is, Harry? You’re a coward,” he says. “All you want is to leave this sh—ty little life behind to break free, but you don’t have the guts to do it on your own. So you find people like me to bring you there. To trust you. And there you are, saying all the right things — ‘I’m right here with you, Jamie … Tell me about Nick, I understand…’ —  but when the time comes to jump, you go down your escape patch, back to your little life, and I am on the f—king edge! Out here! Because of you!”

“So what do you want?” Ambrose asks.

When Ambrose retorts that there’s no way out of this that is going to satisfy Jamie, he takes a step back and points his firearm in the direction of Eli’s head. 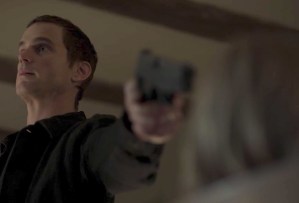 “Please!” Ambrose pleads. “He’s 10 years old. Don’t you remember when you were 10 years old? It was before Nick, and you were just innocent.” The very mention of Nick triggers Jamie, but Ambrose doesn’t stop. He continues to taunt him. “You keep on trying to prove yourself, going to the edge, over and over—”

“Stop!” Jamie yells, firing his gun into the air. “You play the game right now, or he’s dead! No more bulls—t! I’m going to pull this trigger!” But Ambrose refuses. He calls Jamie’s bluff.

“Go ahead! Kill him!” he says. “And then what? And then you’re going to have to kill me, and you’ll be alone! You’ll be alone and no one will ever understand you, ever! Do you hear me? Ever!”

Jamie starts shaking. He points his weapon towards Ambrose, then towards himself. “Do it!” yells Ambrose. “Do it! What are you waiting for?” That’s when Jamie finally loses it and lunges towards Ambrose. The gun goes off and the detective gets shot in the arm. He then tells Eli to make a run for it, before anything else happens.

Ambrose runs out towards the woods, and Jamie follows. He attempts to kill the detective there, but he’s unsuccessful. Ambrose hits him over the head with a rock and runs back inside, where a final battle ultimately ensues — this one of the mind. Jamie waits for the detective in the kitchen, but he doesn’t intend to kill him. He agrees to surrender his gun, then encourages him to call for backup. Only he doesn’t think Ambrose will be satisfied to have him rot away in prison.

“Until you bring what is unconscious into consciousness, it will control your life, and you will call it fate,” Jamie says, paraphrasing a Carl Jung quote told to him by Nick. “The more you deny what’s inside of you, the stronger it will come after you. It also comes from outside, like the people who come into your life, just at the right time.” For Jamie, that person was Nick. For Ambrose, that person is Jamie, and it’s the only reason that he continues to exist. In Jamie’s mind, he is only there to force Ambrose to admit that they’re the same. “Take it from me, Harry. You can’t outrun this,” he says. “If it’s not me, it’ll be someone else coming back at you over, and over, and ov—” That’s when Ambrose pulls the trigger, and fires a fatal gunshot into Jamie’s abdomen. Both of them are stunned.

In the immediate aftermath, Ambrose walks outside. He calls Soto and tells him that he needs an ambulance immediately. He then heads back inside, and Jamie pleads with him to apply pressure to his wound. We then watch as a terrified Jamie grapples with his imminent death and places blame on Ambrose. “You didn’t have to shoot me,” he says. “All you had to do was call for them.” Ambrose apologizes. Jamie eventually loses all sensation in his legs and drags himself across the floor, begging for he paramedics. Ambrose puts in another call to Soto, but the EMTs won’t make it in time. So he gets back on the floor and tells Jamie to stay calm, to try and reduce the bleeding. But Jamie knows his time is up. He begins to whimper, then asks Ambrose to take his hand. The detective strokes his hair and tells him that it’s OK. Everyone has to die sooner or later, and he’s not alone. Jamie cries and tells himself that he’s not a bad person, then takes his final breath.

After the authorities arrive, a guilt-ridden Ambrose contemplates turning himself in for killing Jamie. He tells Soto that he made a mistake, but Soto says it doesn’t matter now. They can all move on. But as the final scene reveals, Ambrose can’t quite shake his guilt. We jump ahead a few weeks in time, and the detective is sitting in Sonya’s kitchen. She asks him what Jamie was like in the end, and he tells her that he was “scared.” He can’t bring himself to say anything else before he breaks down in tears. Sonya embraces him, and the season comes to an end.

What did you think of The Sinner Season 3? And now having seen it all, which season would you say has been your favorite? Weigh in via the following polls, then drop a comment to expand on your choices.