A lot can happen in three months. Anger can fade. Hearts can heal. Reconciliations can occur.

Or, if you’re A Million Little Things‘ Gary, in that time the painful end to a romantic relationship can turn into a deep spiral that makes you an angry, hurting, belligerent human being.

The latter is the state in which we’ll find James Roday‘s character when the ABC drama returns in its new time slot Thursday (10/9c), the actor tells TVLine.

“Breakups are tough, especially when the stakes are life-and-death, and people are fighting cancer,” he says. (Viewers will recall that Roday’s Gary and Allison Miller’s Maggie called it quits in the fall finale, after she said she needed some space to figure out her post-cancer identity.) “It’s always a time where people make bad decisions, because they’re not quite themselves and they’re picking up pieces. I’ve certainly been there.” He chuckles. “It’s also a great excuse to make bad decisions, because you’re going through a breakup.” 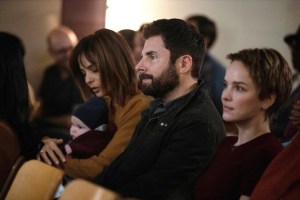 Miller recently told TVLine that Maggie has spent the three months between Episodes 9 and 10 doing “some deep digging and some soul-searching, and maybe a bit of travel. She does really get to a much better place than she was when we left in the fall finale.” That’s not so for Gary, whom a recent promo shows spends much of his time in the first few episodes back snarking at his friends, trading fisticuffs with Eric and… getting arrested?

“I think you will very shortly recognize that no one thinks he’s handling things very well, and he will have to face that music,” Roday says. “As all members of this tight-knit group of friends have mirrors held up to their faces by the others, Gary is no exception.”

He adds that Gary and Maggie’s first contact since their split will happen in Thursday’s episode — but don’t get your hopes up for a tearful reunion. At least, not yet.

“It’s sort of awkward,” he previews, “and as uncomfortable as you’d probably expect.”