The doors of The Goop Lab will be opening very soon at Netflix. The streamer’s docuseries, which takes a closer look at Gwyneth Paltrow‘s lifestyle and wellness company, will drop on Friday, Jan. 24.

Initially ordered at Netflix in February 2019, The Goop Lab will consist of 30-minute episodes hosted by Paltrow, chief content officer Elise Loehnen and Goop’s editors. As teased in a new trailer for the show (which you can view above), the episodes will explore topics like energy healing, the use of psychedelic drugs, female sexuality and more.

“What we try to do at Goop is explore ideas that may seem ‘out there’ or too scary,” Loehnen explains in the teaser. (And it might be an understatement, because Loehnen later reveals that she “had an exorcism” while trying out energy healing. As one does!)

Launched by Paltrow in 2008, Goop began as an email newsletter focused on health and wellness. It later became a website and, eventually, expanded into e-commerce with its own brands and products.

Check out The Goop Lab‘s official poster below, then tell us: Will you be watching the series? 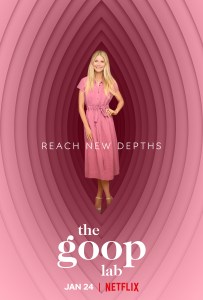