As promised, Wednesday’s episode of American Horror Story: 1984 revealed how Montana and Richard first crossed paths, but in true AHS fashion, it also revealed so much more. (Arguably too much, depending on how you feel about feet.)

The origin of this unlikely pairing is actually fairly simple; Richard wandered into one of Montana’s coke-fueled aerobics classes, immediately bonded over their shared love of deadly knives, then murdered one of her students because, as he explained it, “I didn’t like the way he was talking to you.”

A normal person would be appalled — horrified, even — by this senseless act of violence. But not Montana. “That’s the most f–ked up thing anyone has ever done for me,” she said. “That’s so hot.” Richard, naturally, took this as an invitation to lick Montana’s bloody feet, which she also seemed to enjoy quite a bit.

Then came some bloody pillow talk, during which Montana asked Richard to kill Brooke because — wait for it — her brother was the best man at Brooke and Joey’s wedding! “I know Brooke f–ked my brother and lied,” Montana said. “Why does she get to live while he’s gone?”

With those blanks sufficiently filled in, we returned to present-day Camp Redwood, where Montana and Richard were scrambling to track down Brooke and beat Mr. Jingles to the punch. They ended up finding her at the exact same time, which was fortunate for Brooke, as it allowed her to escape while Richard and Jingles fought to the death. (Well, they fought to Richard’s death, which came courtesy of a tree branch through the head.) 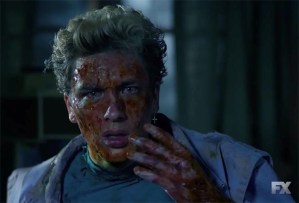 Earlier in the hour, Mr. Jingles paid a visit to the dining hall, where Xavier got Hansel and Gretel’d (aka locked in an oven). And unlike the sex tape he filmed for Blake, it was not a pretty picture. Chef Bertie, another of Jingles’ victims, used her last ounce of strength to free Xavier from his pre-heated death trap, a favor he repaid by jamming a knife straight into her heart. (On this show, a merciful death is still considered a win.)

The next game-changing — if somewhat predictable — reveal came during Jingles’ long-awaited reunion with Margaret. We learned through a series of flashbacks that Margaret and “Benji” were quite chummy back in 1970; he even carved her a little wooden bear and promised to protect her. But when he failed to keep the other counselors from bullying Margaret, she took matters into her own hands, killing them all and blaming it on her beloved Benji.

Jingles’ response to this confession was simple: “F–k you, Margaret. I am the monster that you made me!” He lunged for her, but we all know that this glamorous lunatic is packing heat, so Mr. Jingles was dead on the floor before he could make good on his threat. (Spoiler alert: Jingles actually survived being shot, and he managed to sneak away while this next bit of nonsense was going down.)

Enter Trevor, who was ecstatic to discover that Margaret had taken care of Jingles… until she knifed him in the stomach, among other vital organs. “God has given me the strength to accept my true self,” Margaret declared before dumping Trevor’s body into a car and lighting it on freaking fire. Ladies and gentleman, this woman is even more insane than we all assumed.

And speaking of insane, Rita — excuse me, Donna Chambers — regained consciousness in the woods just in time to witness Richard returning from the dead. Floating body, soulless black eyes, the whole nine yards. You know, stuff you see in the woods!

Time to weigh in: Which of this week’s reveals surprised you the most (if at all)? And where do you think this season is really headed? Drop a comment with your thoughts and theories below.