The opening minutes of MTV’s The Hills: New Beginnings (premiering Monday at 10/9c) offer countless demonstrations of reality-TV makeup maintenance, but no hint of the original series’ fourth wall-breaking ending.

In the video above, viewers are re-introduced to Heidi and Spencer (who boast of defying the #haters by making their everlasting love work), Audrina and others, all in varying stages of flirtatiousness and yell-y declarations/baiting. 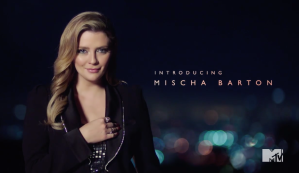 And then there is Mischa Barton (as in “Introducing…”), who may be new to this particular mix but is an old pro when it comes to serving up devastating side-eye and attitude-filled sashaying. In one of her brief snippets she speaks of how the people in her life have let her down — and we’ll assume she doesn’t mean the agent who booked her on a Hills sequel.

The original MTV series ended by revealing, to gob-smacked millions, that all of the gang’s high draaaaama was not entirely real, but in fact scripted and played out before teams of professional cameramen. The sneak peek above, however, offers no suggestion that that twist will be acknowledged. New Beginnings may, in fact, be completely legit!

Will you be tuning in?