“In every child’s nightmares, there’s an element of truth,” Mrs. Coulter warns us in a new teaser trailer for His Dark Materials… which then spends the following minute or so illustrating that concept.

Philip Pullman’s series of novels — which consists of Northern Lights, The Subtle Knife and The Amber Spyglass — follows Lyra, an orphan who lives in a parallel universe in which science, theology and magic are entwined. Lyra’s search for a missing friend uncovers an evil plot involving stolen children and turns into a quest to understand a mysterious phenomenon called Dust.

The small-screen adaptation boasts an all-star ensemble that includes X-Men‘s James McAvoy (as Lord Asriel), The Affair‘s Ruth Wilson (as Mrs. Coulter) and Hamilton creator Lin-Manuel Miranda (as Lee Scoresby). They are joined by The Wire‘s Clarke Peters (as The Master) and Logan breakout Dafne Keen (as the aforementioned Lyra).

The newly released look at the BBC/HBO adaptation makes it incredibly clear: The world Lyra has stumbled into is no toddler playground. In fact, “This is war,” one character notes. 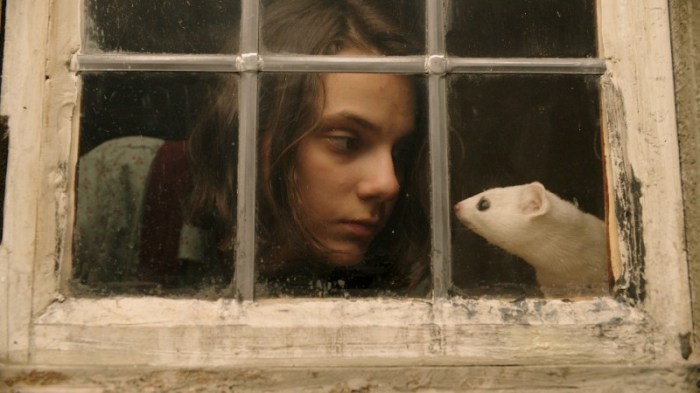 His Dark Materials still doesn’t have a premiere date, but network president Casey Bloys recently suggested that it would air on Monday nights in late 2019.

Press PLAY on the video above to watch the new footage, check out some new photos via the gallery at right, then then hit the comments with your thoughts. Are you planning to go Dark?