Wednesday’s episode of Pretty Little Liars: The Perfectionists perpetuated a theory long held by the Freeform franchise: Never trust a handsome gentleman with a British accent.

Through the magic of cyber-sleuthing, Taylor obtained the IP address of the computer used to cause the blackout the night her brother was killed: “It was a Hotchkiss device, logged onto by… Jeremy! He timed the Beacon Guard blackout to give himself a window of time to get up on the roof, then arrive back at the bottom before the crowd showed up.” What’s more, “Jeremy was walking towards Thorne Hall moments before the blackout.”

Taylor’s discovery was enough to convince the other Liars, all of whom ditched a Beacon Heights University gala to confront Nolan’s possible killer by the docks. After a few vaguely ominous statements (“If I tell the police what I did, my life will be over!”), Jeremy tried to get away, but Quickdraw Hotchkiss was packing heat and took him down with a single bullet.

Though the Liars were more than willing to craft a cover story for their murderous pal — Ava even planted a blunt object in Jeremy’s hand to make it look like Taylor was acting in self-defense — they won’t be needing it, as Caitlin discovered at the last minute that Jeremy is, in fact, alive. Oops? 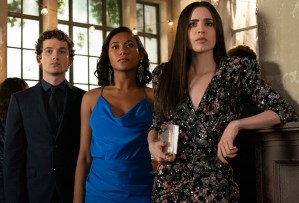 Other developments worth discussing…

* Prior to the events mentioned above, Claire informed Mona that her position at BHU has been terminated due to her inappropriate behavior with Mason — because apparently PLL suddenly decided to start cracking down on its teacher-student relationships.

* Taylor revealed that she created Beacon Guard to keep people safe after her own father was murdered. (That said, I’m not giving up on my theory that Mr. Hotchkiss is alive and connected to his son’s death.)

* Despite a last-minute assist from Andrew, it’s really starting to look like Dylan will be expelled from BHU for cheating.

* Ava shared a kiss with Zach, which could also be their last, depending on how aggressively Dana goes after her over the bag of stolen money she discovered at Caitlin’s house.

Do you believe that Jeremy really killed Nolan? If not, who’s No. 1 on your list of suspects? This was the last episode before the big season finale, so drop a comment with your best guesses below.