HIGH POINTS | Surviving an entire glass of Maester Cressen’s poisoned wine; resurrecting Jon Snow; being welcomed by Daenerys at Dragonstone; learning that Daenerys could be The Prince (or Princess) That Was Promised 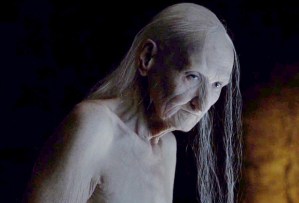 LOW POINTS | Seducing Stannis Baratheon into cheating on his wife; giving birth to a murderous shadow so that Stannis could ascend to power; nearly getting killed by Davos; leeching Gendry’s blood for a ritual; attempting to burn Mance Rayder alive; sacrificing Shireen Baratheon, then getting exiled from the North for doing so; secretly living as an extremely old woman

CAUSE OF DEATH | Old age

EPITAPH | Melisandre’s life was indeed dark and full of terrors, as her allegiance to the Lord of Light continuously led her astray. But the Red Priestess sure had conviction — perhaps even more than the lords and ladies fighting for the Iron Throne.

Now it’s your turn. Hit the comments with your favorite Melisandre moments over the years, and then tell us which Game of Thrones character you fear/hope will fall next!