Chilling Adventures of Sabrina‘s titular teenage witch flirted with the dark side in Part 1, but when the Netflix drama returns for Part 2 on Friday, she’s ready to make a serious commitment.

“Her duality is strong — there’s a strong part of her that’s mortal, but I do think there’s that dark side in her,” Kiernan Shipka told TVLine and other outlets during a recent visit to the show’s Vancouver set. “Playing with that has been super fun. She’s really excited about [the path she’s on] right now.”

Indeed, Part 2 puts our girl Sabrina on entirely new path, one lined with new frenemies, romances and dangers. And if Sabrina thought that blending her mortal and magical circles would make things less complicated, she’s in for a rude awakening.

“Now that Sabrina’s friends know that she’s a witch — and they’re not about to be killed — they can talk about it more,” Shipka says. “It’s a massive shift in the friendship because they know so much more about her.”

Chilling Adventures of Sabrina Part 2: What to Expect 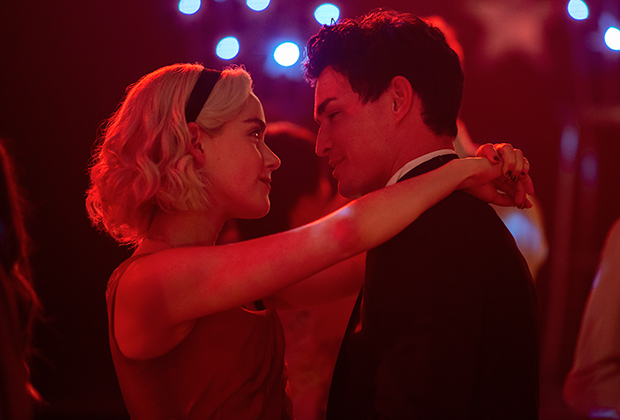 In addition to what Part 2 has in store for Sabrina, we also chatted with Ross Lynch (Harvey), Gavin Leatherwood (Nick), Chance Perdomo (Ambrose), Jaz Sinclair (Roz), Lachlan Watson (Susie), Adeline Rudolph (Agatha), Richard Coyle (Blackwood), Lucy Davis (Hilda) and Miranda Otto (Zelda) about what we can expect from their characters in the coming episodes.

Browse our gallery of teases from CAOS Part 2 — you can click here for direct access — then drop a comment with your own hopes for the Chilling new installment below.