Melissa Joan Hart will make her full-time return to TV in just over a month.

No Good Nick — which received a 20-episode commitment from Netflix back in September — centers on 13-year-old Nicole aka Nick, who infiltrates a family with the intention to get revenge on them for unknowingly ruining her life. As she gets to know the family, though, she will find compassion for them and will struggle with whether or not she can go through with her plan.

In addition to Hart and Astin, who star as the parents at the center of No Good Nick, the dramedy’s cast includes Siena Agudong (Star Falls), Lauren Lindsey Donzis (Liv & Maddie) and Kalama Epstein (The Fosters).

Netflix has also unveiled the official poster for No Good Nick‘s first batch of episodes. Check it out below, then drop a comment and tell us: Do you plan to tune in? 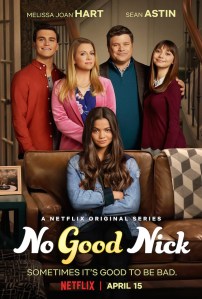