Idris Elba’s having a bit of an identity crisis in the first trailer for the upcoming Netflix comedy series Turn Up Charlie. The Luther star plays a once-renowned DJ whose star has fallen. Not making enough money playing weddings, he reluctantly agrees to look after Gabby (newcomer Frankie Hervey), the problem-child daughter of his movie-star best friend David (TURN‘s JJ Feild). 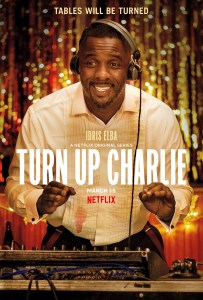 Meanwhile, David’s wife Sara (Covert Affairs‘ Piper Perabo) has the career that Charlie so desperately wants. She’s a fellow DJ who has taken the world by storm and intends to have the song of the summer.

All eight Season 1 episodes drop on Friday, March 15. In the meantime, Netflix has also released the attached key art (click to enlarge).

Elba will make his Saturday Night Live hosting debut in support of Turn Up Charlie on Saturday, March 9. Then in June, he is set to reprise his role as DCI John Luther in Season 5 of the aforementioned BBC America crime drama Luther.

Press PLAY on the trailer above, then hit the comments and tell us if you’ll be adding Turn Up Charlie to your Netflix queue.