There’s nothing like being on your own to make you miss your mother. Lucky for Good Trouble‘s Callie and Mariana, both of their moms (played by The Fosters vets Teri Polo and Sherri Saum) stop by the spinoff this Tuesday (Freeform, 8/7c) to check in on their daughters.

But Lena and Stef may get more than they bargained for with the girls’ unorthodox communal living situation. Below, executive producer Bradley Bredeweg previews what the parental units think of their daughters’ new lives and talks about the couple’s next phase.

TVLINE | What was it like to have Teri and Sherri back on set, but in this different environment of the spinoff?
It was incredible. They showed up for the table read before we even started shooting, obviously, and we all just bawled. We all cried. We all hugged. We all cheered. It felt like we were back at home. And then when they first stepped onto set, it was interesting because we’re in a new soundstage. We’re at a new studio where the sets are completely different. But here are these two incredible women that have been in our lives for so long, and it just felt like we were a little bit in The Twilight Zone, but in the best way possible. After a couple of minutes, we all just settled in, and it felt like we were right back at it. 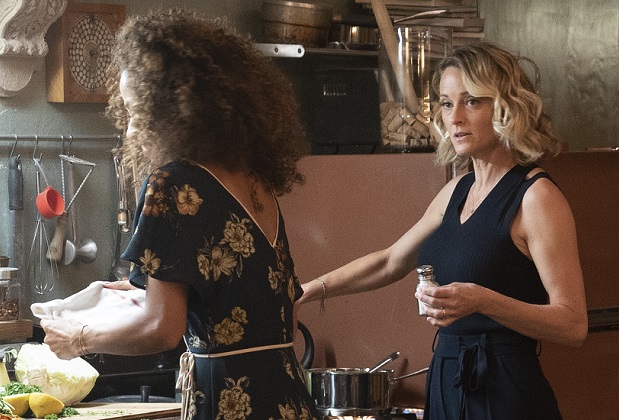 TVLINE | How has life changed for the moms since we last saw them?
They are empty nesters. They’re living on their own, and they’re just sort of face-to-face now. They don’t have any of their kids in the house to have to maneuver through and help them through the teenage years anymore. So it’s a whole new set of challenges and a whole new set of rules. But also, they get to just love on each other and breathe and settle into the next phase of their life. But as we all know, when you’re so used to a big family, it’s a transition. They’re going through that shift.

TVLINE | Lena and Stef are stepping into this very unique living situation that Callie and Mariana have found themselves a part of. What’s their reaction to The Coterie and its residents?
Stef’s reaction is hilarious. [Laughs] At every turn, she’s just questioning everything. She really gives the place a once-over on that first tour. The girls take the moms on a tour of The Coterie, and Stef, almost like she has a checklist, [is] making sure everything’s safe and making sure the people that they live with are up to par. She’s playing mama tiger, as we called her in the pilot of The Fosters. Lena’s a little bit more free-spirited about it, per usual. She’s trying to convince Stef that this is the girls’ life, and this is their choice and let them figure it out, and we’re here if they need us, but this is what happens when you’re in your twenties. You step out into the world. You make your own decisions, and sometimes there are consequences, and we just have to let the girls know that we’re their moms, and if they need us, we’re right there for them. 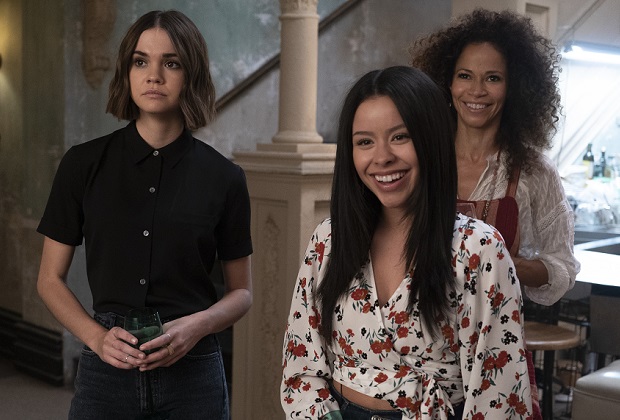 TVLINE | What does it do to the girls to have their moms back in their lives, especially at this time when things are very uncertain in their personal and professional lives?
At first, the girls are (A) obviously excited to see their moms because they miss them terribly, but (B) it’s also when you’re in your twenties and your moms are around and you’ve started these new relationships, it can be a little embarrassing and a little confronting, and a little much. But then at the end of the day, the moms are there to support and to love and to hold Mariana and Callie’s hands through life. Our two young women realize that and embrace how important their moms are to them at every step along the way.

TVLINE | There’s a lot of comedy in this episode. Was this the most fun that you’ve had with the moms?
I have never had more fun in my creative life, and I really mean it. I’ve directed a lot of different kinds of episodes and produced hundreds of hours of television now, but this was just a blast. There’s more comedy in this than I think we’ve ever had on either The Fosters or Good Trouble, and we just ran with it, and we did a lot of improvising. We did a lot of, “Let’s get off the script a little bit and see what happens.” Teri Polo is a master in all of this. Her comedic background really helped set the tone for this episode in particular. It was such a joy to have them all around, tonally, with this kind of episode. 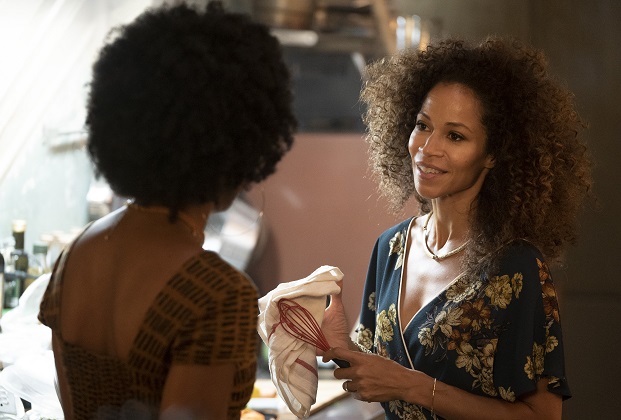 TVLINE | There are also some incredibly moving scenes between the moms and some of the residents of The Coterie. Can you talk about how having the moms come in allows you to explore the other characters who live there?
Both Stef and Lena just have this incredible energy and this sort of innate ability to draw those kinds of things out of you. It’s been their passion in life to take care of kids, and especially kids in need. So I think whenever Stef and Lena are around, for some reason or another, characters just want to open up their hearts and pour their souls out to them. That’s what happened, in particular, with Malika and Lena, and then also with Dennis and Stef. That scene in the bathroom with Dennis and Stef is one of my favorite moments, again, that I’ve been a part of. It was so pure and raw and emotional. The two of them as actors just really had each other’s backs, and it was really beautiful to be a part of.

TVLINE | I have to ask, since he is involved with Callie, what are the moms’ first impressions of Gael?
[Laughs] We don’t touch upon it totally, completely, in Episode 5. We get to it a little bit more in Episode 11. I think the moms are kind of a hang-back-and-wait-and-see kind of a thing with Gael. He seems like a great young gentleman, and I think they’re more concerned and focused on Callie stepping into her twenties and focusing on her career, as most parents want for their children. But if she falls for someone, then they’ll support her in that, too.