“Ex” marks the spot for Kimberly Williams-Paisley, who will guest-star in the very next episode of The CW’s The Flash (airing Tuesday, Feb. 5 at 8/7c).

TVLine has learned that Williams-Paisley will play “multiple versions” of Renee Adler, one of Earth-221 detective Sherloque Wells’ many ex-wives. 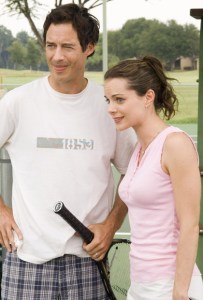 Interestingly (at least to me), this is far from the first time Williams-Paisley and The Flash‘s Tom Cavanagh have worked opposite each other. The two costarred in the 2006 film How to Eat Fried Worms (photo at right), and as of late Cavanagh has played ADA Miles Strasburg to Williams-Paisley’s legal eagle Claire Darrow in Hallmark Movies & Mysteries’ Darrow & Darrow franchise (photo here).

The actress’ previous TV credits also include According to Jim, Two and a Half Men, Nashville, Relativity and Netflix’s recent holiday movie, The Christmas Chronicles.

Elsewhere in The Flash‘s next episode, titled “Goldfaced”: Barry and Ralph go undercover as criminals to purchase a device that could help them stop Cicada, while Iris ends up in a dangerous situation as she investigates a lead on Cicada’s whereabouts.