Fathers and daughters were very much a theme this week in The Flash‘s (belated) Thanksgiving episode, as Nora grew frustrated with Barry’s derring-do, Weather Wizard’s little girl stormed Central City and Cicada’s backstory was revealed.

When unusual weather pops up in Central City, including a lightning storm that results in Barry’s near-death while at a distraught Nora’s side, the team suspects that Mark Mardon aka Weather Wizard is somehow responsible. They pay a visit to Iron Heights, where the Season 1 meta has been — and still is — cooling his heels, when a mini tornado pierces the roof of the prison, and Mardon’s daughter, Joss, swoops in. After Barry whisks Mardon to the pipeline, thinking that Joss is there to spring Daddy, she gives Flash a deadline to producer her pop… or else.

After learning from Mardon that he and Joss aren’t close — he bailed on his baby mama to focus on his (criminal) career — Team Flash deduced that Weather Witch is using a staff powered by meta tech. At the meet-up, Barry delivers Mardon, onto whom Joss immediately drops a Hummer, crushing her “selfish dick” of a dad. Only, it was actually a hologram of Mardon, controlled remotely by Iris. Weather Witch flies off, vowing to make Central City pay for Flash’s deception.

Ever since Barry’s near-death, Nora has been in a foul mood, which Iris incorrectly assumes is because of the decision she made that put Barry in jeopardy earlier. But after the hologram incident, Nora vents to Barry that he is what is upsetting her: “You don’t seem to give a damn if you lose me!” Nora explains that she grew up angry with her dad for vanishing, but because he was her hero, she directed her energies at villainous metas (though how, if she only got her powers shortly before traveling to 2018?). Nora offers up a solution, for Barry to give up being The Flash, thus saving him from his future fate. After all, if it hurt so much losing a father she barely knew, it will only hurt more now.

Deciding that the only way to fight weather is with weather, Iris has Nora fish from storage Mark Mardon’s wand, which she delivers to Barry at the airport tarmac where Weather Witch has surfaced. When Joss whips up a tornado made of lightning, Barry — with Nora’s approval  — uses the wand to corral all the lightning, even if it means dangerously infusing his body with allll that energy. He survives and unleashes it upon Joss, KOing her and allowing him to slap on some meta cuffs.

Afterward, Nora says that she understands why her father needs to sacrifice himself to save others, even if it risks leaving his family behind. But Barry explains that when it comes to saving people, the person he thought about most at the tarmac was Nora. He doesn’t choose being The Flash over family; he is The Flash for his family. And if the future demands it, he will sacrifice himself to save Nora and Iris.

Everyone — including Cisco and Sherloque, after Killer Frost emerged to snap them and Caitlin out of a “thankless” Thanksgiving funk! — then gather for a holiday feast. 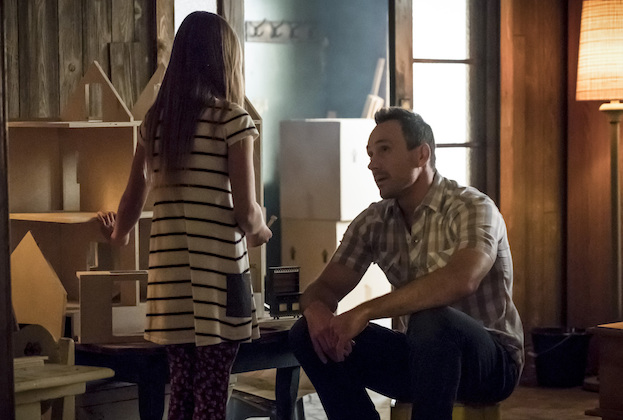 Meanwhile, in flashbacks triggered by Barry’s close call with Orlin Dwyer aka Cicada outside the comatose girl’s hospital room…

We learn that the little girl, Grace, is the orphaned daughter of Orlin’s sister and her husband, who were killed in a meta attack. At the time, Orlin was a massive loser who had zero interest in parenting. But after serving one too many leftover lo meins for breakfast, and after getting an earful from Grace about how she hates him as much as he hates himself, he vows to change his ways and do right by his niece.

Alas, it was during the one-year celebration of that promise, a year during which they began making amends while fixing up a home for themselves, that the Enlightenment happened. And in the madness, a crashed piece of debris impaled Orlin with the shard he now uses as a dagger, while Grace was left unconscious, to this day, by brain hemorrhaging. Sitting vigil at Grace’s bedside while hearing a news report on the latest meta — Gridlock —  to hit town, Orlin gets riled up to the point that the dagger pulled from his body zips across the room and lands in his hand. He then declares that he will make things right: “Every meta will die!”

In the present day, Orlin makes a point to visit Grace’s bedside on Thanksgiving — a gamble that doesn’t pay off, seeing as, thanks to Sherloque’s thinking, he is caught on CCTV by Team Flash: “I present to you Orlin Dwyer,” aka Cicada!