Remember when it seemed like Season 15 of The Voice was getting off to kind of a slow, understated start? No shoe-throwing or anything. Well, that all changed with Tuesday’s Night 4 of the Blind Auditions, during which a contestant so rocked the coaches that she got not one but both of Jennifer Hudson’s shoes, one of Adam Levine’s sneakers, a Kelly Clarkson jacket and yes, even Blake Shelton’s drink. How’d the singer (pictured above) get them all riled up? Read on… 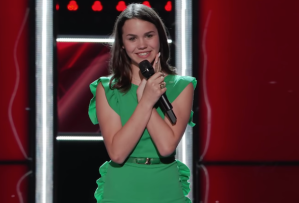 Reagan Strange (Team Adam), “Meant to Be” — Grade: C+ | This 13-year-old Voice superfan came off as cute as a button during her pre-interview. But on stage, though she sang sweetly and with a bit of oomph, she didn’t demonstrate the greatest control over her voice. That shaky quality was probably just a side effect of her nerves — she couldn’t contain her excitement at talking to the coaches. However, she’s gonna have to get it together big time if she’s going to compete with singers as formidable as Kennedy Holmes, who’s the same age but a whole lot more poised and polished. 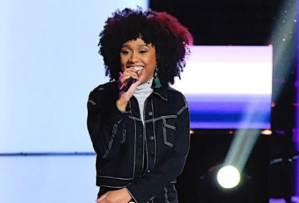 Foushée (Team Adam), “Redbone” — Grade: B | This daughter of a drummer in a reggae band has presence to burn — she’s lovely and swag, and looked at-home enough behind the mic that you could’ve convinced me that that was where she’d been born and raised. What’s more, her voice overall had a nice, silky quality that Adam likened to something from outer space. I’m less wowed than the coaches by that squeal that Blake described as the “dog-whistle note.” But at least it showed that she has range. 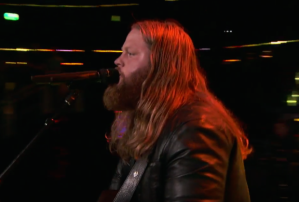 Chris Kroeze (Team Blake), “Pride and Joy” — Grade: B+ | “How could that pretty voice come out of him?” this small-town guy told us he’d often heard. And he certainly looked the part of the country rocker. Better yet, he sounded the part. He covered Stevie Ray Vaughan with enough gravel in his voice to pave a road. (Mystifyingly, Adam thought the singer might be a gruff woman. Come again?) I’m not sure Chris is the best, and definitely not my favorite, artist in his lane this season. (That would probably be Michael Lee.) But if I wandered into a dive bar that he was playing, I’d be perfectly happy listening to him while I got my drink on. 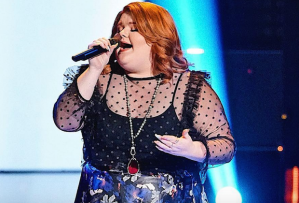 MaKenzie Thomas (Team Jennifer), “Big White Room” — Grade: C | After trying out in Season 14 and, as she recalled it, basically blacking out during her performance, MaKenzie worked on her nerves and came back determined to get chairs turning. Mission accomplished. The beautiful tone of her voice won over JHud. However, when the comeback kid wasn’t singing full-out, her vocal had a tendency to get so wobbly that she sounded like she was trying to sing while sitting on a waterbed somebody was bouncing on. She has something; I’m just not convinced she knows what to do with it.

SandyRedd (Team Kelly), “River” — Grade: A- | A 35-year-old mother of two from Chicago, SandyRedd didn’t so much walk on stage and sing as walk on stage and put on a capital S-H-O-W. Tackling Bishop Briggs’ roof-rattler with cojones that Season 13’s Noah Mac only wished he’d had, SandyRedd howled with the ferocity of a wild animal uncaged for the first time in a long time. Was it vocally perfect? No, but it was thrilling as hell, and anyone who can pack a performance with that much intensity has got to go far. Right? (Given that she earned four chair turns and a lotta footwear, I’m gonna go out on a limb and say, “Right.”)

So, who stood out for you on Night 4 of the Blinds? Would you have thrown a shoe for SandyRedd? Someone else? Vote in the poll below, then hit the comments. Did anyone really make you sit up and say, “Now that is a star”?