“The Final Fight” is at hand, declares the key art for the fifth and final season of The Last Ship. And if the below image of Eric Dane’s heavily armed Tom Chandler doesn’t leave you seeing red, there’s an excellent chance that your vision needs to be checked.

As previously reported, when the TNT drama returns with its last 10 episodes on Sunday, Sept. 9, a significant amount of time will have passed since a deadly virus took its toll on the world. Not that everything is hunky-dory around the globe. Though Admiral Chandler has retired and his former crew, moved on, Sasha Cooper (Bridget Regan), Lt. Danny Green (Travis Van Winkle), SBS WO-N Wolf Taylor (Bren Foster) and Sgt. Azima Kandie (Jodie Turner Smith) are soon blamed for an attack on the Panamanian president. As a result, the USS Nathan James must set sail in hopes of preventing a Latin American invasion and another world war.

Scroll down to check out TVLine’s exclusive Season 5 poster, then hit the comments to let us know if you are looking forward to the series’ return. 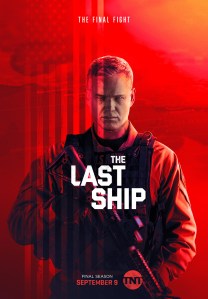