Warning: The following contains spoilers from The Affair Season 4, Episode 8.

The Affair will never be the same following Sunday’s devastating revelation.

In the third-to-last episode of Season 4, the Showtime drama killed off Alison Bailey, played by original cast member Ruth Wilson. The character, who had long suffered from depression over the loss of her son Gabriel in a drowning accident, ultimately died by suicide by drowning herself near her Montauk home. 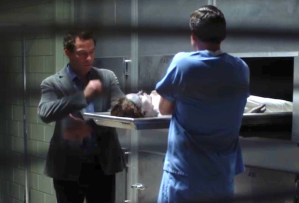 Noah and Cole received the news while at James’ house. Alison’s father excused himself to answer the phone; it was Athena, calling to confirm that the authorities had found what they believed to be Alison’s body. Noah and Cole then headed down to the morgue, where Noah confirmed that the body indeed belonged to his ex-wife.

In an interview with The Hollywood Reporter, series creator Sarah Treem confirmed that Alison is in fact no more, and that the character was written out of the series per Wilson’s request.

Wilson’s departure comes just weeks after Showtime confirmed that The Affair will end after Season 5. She previously took home the Golden Globe for Best Actress in a Drama in 2014.

The Affair Season 4 concludes in two weeks, on Sunday, Aug. 19.