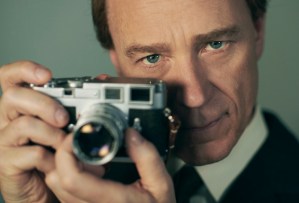 In the first of two new images released by Netflix ahead of Season 3 of The Crown, the two-time Oscar nominee is seen puffing away in the role of Princess Margaret, previously played by Vanessa Kirby. The second shot focuses on The Exorcist’s Ben Daniels, who also seems to be focusing on us, as Matthew Goode’s former character, Lord Snowdon — Antony Armstrong-Jones. Only two days ago, Netflix gave us our first glimpse of Broadchurch‘s Olivia Colman, who’s stepping in for Emmy nominee Claire Foy as Queen Elizabeth in Seasons 3 and 4.

So, first impressions — do Bonham Carter and Daniels meet your approval? Weigh in in the comments.