We knew it was coming. We’d been told that the stadium had fallen. But, as we watched the last episode of Fear the Walking Dead before its midseason finale, that did nothing to diminish the dread that took hold of us as tightly as a slugger would his bat. Was there any hope that Madison might have made it out alive? Read on.

‘YOU TOLD ME WE COULD TAKE ‘EM!’ | Picking up where “Just in Case” left off, “The Wrong Side of Where You Are Now” began with what could well be John’s last words to Naomi: “I got your note.” Since he wasn’t doing well, she had to risk running into the Strand/Alicia/Lucy vs. the Vultures shootout to retrieve the field kit from the ambulance. But “I’ll be back,” she promised Morgan, who’d volunteered to stay with his friend. “I know you will,” he replied, apparently taking on faith that “Laura” is as wonderful and trustworthy as John had believed. Unfortunately, by the time Naomi got anywhere near the ambulance, Mel was putting the pedal to the metal to keep from getting his head blown off. As it was, he still went up in smoke: He’d only driven a few feet when kaboom! Alicia shot the vehicle, causing the kind of fiery explosion that inevitably leads to overcooking. “It’s not what you think,” Naomi insisted to Alicia before narrowly escaping becoming her next victim. (And I certainly hope it isn’t what Alicia — or we — think; I’d like to keep shipping Naomi and John, thank you very much.) Nearby, Lucy got the drop on… Charlie. “Sorry,” the youngster told Nick’s grieving girlfriend. When Lucy turned away for an instant to dispatch a random Vulture, Charlie took flight and wound up being taken aboard Al’s SWAT van by Morgan, who’d convinced the videographer to put down her damn camera and help him and Naomi get John away from there. Though initially Al had protested that “I’m not part of this story,” she made herself a main character — and, presumably, an enemy — by training her van’s machine guns on Alicia in order to protect Naomi. Once “safely” on the road, Al was surprised to hear that their destination was the stadium. But it fell, didn’t it? “That’s why we have to go there,” said Naomi. Since the nurse hadn’t died as Alicia, Strand and Lucy had thought, Al wondered aloud what else they might have gotten wrong.

‘DID YOU EVER THINK WE WEREN’T GONNA MAKE IT?’ | Before Alicia, Strand and Lucy left the battlefield, Alicia saw the most improbable of sights: a banged-up Mel crawling out from the wreckage of the ambulance she’d turned into a firecracker. “How long was [Naomi] with you?” she asked. He was too bad off to reply, but “you know what,” she decided. “It doesn’t matter.” And with that, she killed him. Meanwhile, in the SWAT van, Charlie recognized Morgan as Nick’s friend. “You know what I did — why did you save me?” she asked. “Because,” he replied, serving quintessential Morgan, “this has to stop someplace.” As Naomi discovered that John still had in his possession the Scrabble tiles with which she’d confessed her love for him, Al asked what she’d done to land on top of Alicia & Co.’s hit list. What happened wasn’t her fault, Charlie piped up. “It was mine.” From there, we flashed back to “before” and Charlie’s unexpected return to the stadium to ask for Madison’s help. While on the road, the kid explained, Mel and Ennis had had a fight, Mel had swerved to miss a walker and crashed. Now he needed medical help. In the field, Madison decided that they’d bring him back to the stadium with them. Nick was understandably skeptical — the dude had threatened the hell out of ’em. Yeah, well, Naomi had pointed a gun at Madison when they first met, his mom pointed out, and now they were replanting the diamond because of her. In other words, case closed. Back at the stadium, when Mel awakened handcuffed to a cot, he warned Madison that Ennis had “said if this place wasn’t gonna fall on its own, he was gonna make it fall.” No sweat, she replied. They could handle the Vultures. Oh no, he said ominously. “They’re not the ones you need to be worried about.” 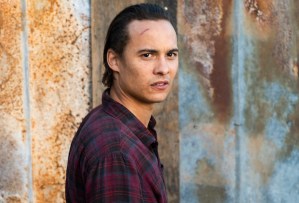 ‘DON’T MAKE ME BREAK THOSE CRACKED RIBS’ | Remember the oil tank full of walkers that Naomi backed into in “Another Day in the Diamond”? Turned out, that wasn’t the only oil tank that the Vultures had filled with walkers. And based on the numbers on the flags left waving on the scarily now-empty tanks, they had at their disposal a virtual army of oil-slicked zombies. Charlie didn’t believe that Ennis would really lead the walkers to the stadium, but then, she probably also believed that it was tres chic of him to wear the equivalent of three thrift stores at once. While Madison & Co. prepared for the worst, reinforcing walls Night of the Living Dead style, Mel attempted to convince Naomi to let him go and leave with him. “The people who stay die,” he argued, “and everything they were fighting for dies with ’em.” Though Naomi didn’t give an inch, she did approach Madison afterwards to suggest that if she really wanted to protect Nick and Alicia, she was gonna have to disappoint them by abandoning their new home. Naomi had been on [insert episode title here], she added. So she spoke from experience when she said that staying wasn’t worth Madison risking her kids’ lives or her own. Off that conversation, Madison gave Mel the Land Rover full of supplies and told him that if he wanted to go, he was welcome to. Since the guy was in really bad shape, Strand challenged Maddie not to give up on Mel any faster than she’d given up on him. But her mind was made up. And hell, no, she wasn’t gonna let him take Charlie. “We’ll keep her safe.” Ironically, that was exactly what her parents had said, too, he pointed out — and then they’d died before their daughter’s eyes. To his credit, Mel didn’t give up fighting to save Charlie easily. In fact, with fairly compelling sincerity, he argued that Madison was “holding on to something that’s gone” and trying to be the kind of person that’s “extinct.” Eventually, however, he had to give up. Seal the gate, Madison ordered once he was through it. “And don’t think about what he said.” 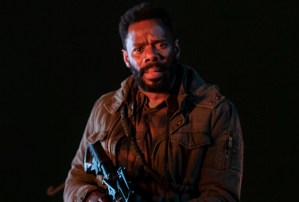 ‘IF YOU TRY TO REMOVE THE SHOWERS, I WILL CHAIN MYSELF TO THE PIPES’ | Later, when Charlie found out from Nick, Alicia and Lucy that Mel was gone, she was worried sick. Since Alicia had left a walkie-talkie turned on in the Land Rover, his ward could check on him, at least. This did not help. All Charlie could hear from Mel was coughing; he could’ve turned for all she knew. So, the child’s pleas to help him ringing in their ears, Nick and Alicia set out to find Mel. Was Strand going to stop them at the gate? No. “Your mother did the same thing for me,” he pointed out. “Far be it from me to stop you.” As (bad) luck would have it, the siblings had no sooner located an unconscious Mel than they saw the walkeriffic convoy go rolling by. They made it back before all but one truck, which left behind it a trail of oil in the parking lot. Since our heroes feared that it was some kind of Vulture trap, they put off having the gate opened to let in Nick and Alicia. But that only allowed the convoy to catch up. In short order, Ennis gave the order to release a horde of walkers and set fire to that oil slick — meaning that, if the walkers lurched through it and then pressed against the gates, the stadium itself would be getting grilled at the world’s worst tailgate party. As the undead swarmed Nick and Alicia’s vehicle, she walkie-talkied to Madison an apology. “We had to try and save [Mel],” she said. “We couldn’t just hide. We didn’t mean to do this to you, but it was the right thing to do.” At least she thought so at the time. As the hour drew to its grim conclusion, Al, Naomi and Morgan arrived at the stadium with John. When Al drove the SWAT van through a blockade and onto the diamond, they found themselves in hell on earth: a scorched field full of crispy, blackened walkers. Good luck getting to the infirmary, Naomi!

So, what did you think of the episode? What possible explanation could Naomi have for her apparent collusion with the Vultures? Now taking wagers — will Madison survive the midseason finale? Hit the comments.