Unbreakable Kimmy Schmidt returned to Netflix on Wednesday, kicking off its fourth (and reportedly final!) season with a premiere that was both relevant and hysterical — like Britney Spears in Crossroads.

Kimmy’s dream gig at Giztoob turns out to be a hashbrown nightmare when Zach orders her to fire an employee “just for doing his job bad.” (Can you believe it?) But after talking it out with her crew — including C.H.E.R.Y./L., her new work friend/robot/lamp — Kimmy crafts a plan to let Kabir go without embarrassing him.

Unfortunately, that plan involves giving Kabir an unwanted shoulder rub, telling him they should only be friends in the “night hours,” then exposing herself and declaring (about a smoothie), “This thing isn’t going to suck itself!” If you understand Kimmy’s brain’s inner workings (or lack thereof), it’s a hilarious series of misunderstandings. But the interaction is considerably less hilarious in the form of Kabir’s sexual harassment report — which, because Kimmy serves as the company’s head of HR, is investigated by the perpetrator herself.

It’s not until Kimmy seeks advice from Titus — who recalls his own #MeToo moment with Mr. Frumpus, the puppet who offered him the role of a lifetime in exchange for sexual favors atop Season 3 — that she sees the error of her ways, eventually choosing to imagine all of her coworkers as different versions of Titus. (Again, if you understand the inner workings of Kimmy’s brain, it all makes perfect sense.) 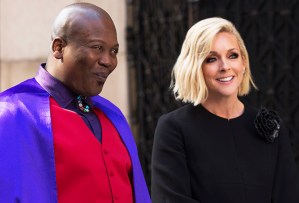 Speaking of Titus, the lovesick thespian teams up with Jacqueline (of White Talent™) in an attempt to win back Mikey. Taking advantage of the #PeakTV era — say, doesn’t TVLine have a column about that? — the duo invents a fake show starring Titus opposite a handsome white person “for believability.” They even recruit a nerd to speak to a “contuter” and make it do posters!

Mikey is impressed (who wouldn’t be?), but Titus’ plan hits a snag when his ex-boyfriend asks to drop by the set of The Capist. (Oh, right, the show is about a crimefighter who also happens to own a cape store.) Fortunately, one of Buckley’s former classmates is the son of Greg Kinnear — whose face Titus and Jacqueline use for the fake poster — and as a lover of love, he’s more than happy to play along.

Lastly — but certainly not least…ly — we have Lilian, who spends the premiere trying to scatter Artie’s ashes at his old Jewish summer camp, which is now the site of a snooty private club. When her attempts to enter the establishment (including my personal favorite: “It’s me, Cyndi Lauper. I just wanna have fun!”) prove futile, she disguises the ashes as cocaine and sells it to a group of d-bags under the condition that they snort it all on the premises. Success!

Now, for a few quotes and thoughts that will make a lot less sense if you haven’t seen the season premiere…

* Titus: “I’ll just have my assistant give you the deets! His name, you say?” [Looks around nervously.] “Table… wood… Rat birth!”

* Jacqueline: “These shows all sound fake! SMILF? Billions? Shameless?”
Titus: “I fell asleep against a wall the other day and they poster’d over me for something called Ray Do-NO-van. Who or what!”

* Every single one of this show’s stars gives an Emmy-worthy performance in this premiere. Maybe it’s because our time with Kimmy & Co. is coming to an end, but I’m finding myself more in love with these characters than ever.

Your thoughts on Kimmy‘s return? Grade the premiere, then drop a comment with your full review.