Lecy Goranson is the latest member of the Conner family to weigh in on Roseanne‘s sudden, shocking demise. “[I’m] devastated by the cancellation of Roseanne,” the actress behind Becky No. 1 lamented Tuesday on Twitter, before adding, “But more devastating are the effects of hate speech and racism on individuals and society.”

Goranson went on to thank fans for their support and concluded by urging everyone to “spread love not hate!” 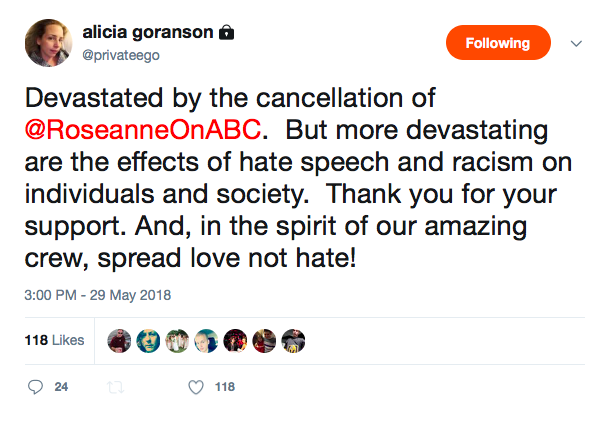 Goranson’s onscreen sibs, Sara Gilbert and Michael Fishman, released statements of their own on Tuesday, with the former denouncing her TV mom Roseanne Barr’s Tuesday-morning outburst — in which she described African-American former Obama advisor Valerie Jarrett as a combination of the Muslim Brotherhood and Planet of the Apes — as “abhorrent.” Fishman, meanwhile, called Barr’s so-called joke as “reprehensible and intolerable.”