ABC’s Deception wrapped its one-and-done run on Sunday with a two-hour finale that finally shed more light on Mystery Woman’s agenda, before setting the stage for what would have been a quite different Season 2.

The opening hour revealed that the stolen Lynx diamond was but one of several artifacts belonging to Corvus Vale members, who years ago entrusted Alistair Black with masterfully safeguarding their fortunes. He did so by way of a secret room that was accessed via a stairwell hidden beneath the trunk young Johnny would get locked in for one of their tricks. 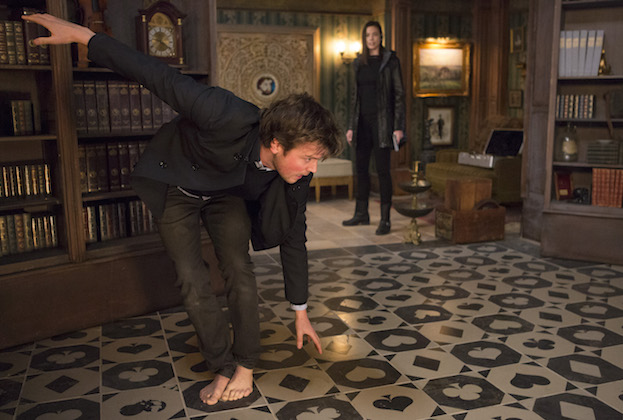 Mystery Woman revealed this secret room after forcing Cameron to turn over to her the final piece of the puzzle, the pen. Once in the underground room, the artifacts would be situated in such a way across several bookshelves that they unlocked and revealed yet another room. Inside there was not the hidden fortunes, though, but one creepy af automaton, who was designed to let fly with a blade if the wrong floor tiles were stepped on. A barefoot Cameron cracked the floor code and got close enough to give the pen to the automaton, who used it to draw out a map leading to the millions. With Mystery Woman stymied by the booby-trapped floor, Cameron slipped out a back door with the map, though she managed to catch up and hold him at gunpoint as Kay & Co. arrived on the scene. Kay took the shot, though, wounding MW and finally landing her in FBI custody.

Before MW could offer up a word to free Jonathan, she distracted the FBI with a hint that a visiting dignitary was in danger. And sure enough, the Buldavian was kidnapped by way of a traffic deception. Worse, his own security chief was behind it, as part of a plot to hold the dignitary’s wife hostage inside the consulate and force him to bow out of an election. Team Deception created a fake consulate which they then lured the dirty security chief into, in order to steal his access codes for the real doors leading to the kidnapped wife. That mostly worked, until the mark got spooked by a mismatching keypad, leaving Cameron, at the real consulate, two digits shy of opening the final door. The FBI leaned on MW to offer a solution, and she suggested a code that worked, so the dignitary’s wife was rescued.

Mystery Woman’s handiwork was far from over, though. Having spent part of the second episode sketching out her origin story, she revealed how Sebastian Black used to freelance as a safecracker for her master thief of a mom. As such, she did consider Sebastian a father figure — until one night in Reykjavik, where he saw young MW hanging out with one of his sons. Deeming the thief’s daughter unworthy of his boys, he berated the girl and sent her away, thus triggering her revenge plan.

Still in FBI custody, MW — who has long goaded Johnny into feeling betrayed and usurped by his brother — got further into his head by proving who she was to him, by pointing out that his favorite coin was not given to him by his father, as he has always claimed, but by her, as a kid, during that night in Reykjavik. And on that note, she reveals that her handcuffs are off, as she rises to leave. Having negotiated immunity in trade for tips on several of the FBI’s most wanted, she walks right on out, despite Cameron’s protests, while Johnny looks shell-shocked.

In the final scenes, Cameron visits Johnny in prison, having stolen the map from the feds, to break him out and seek out the fortune before MW can. Johnny, though, wants no part of the scheme. No, he’d rather KO Cameron and switch places! Later, Kay finds “Cameron” packing up his things and preparing to move on. She begs him not to, promising to do everything she can to free his brother. After all, she says, she doesn’t want to be “just an FBI agent” to him. “Cameron,” though, coldly rebuffs her offer, saying: “No more promises” — before slipping away to meet up with MW, map in hand, where she whispers her name into his ear.