Mom’s the word as The CW’s Supergirl heads into the final stretch of Season 3.

As revealed in new promos and episodic photos, Erica Durance resurfaces as Alura on Monday, May 28, though we’ve never quite seen Kara’s mother like this before — in that she is actually alive! It turns out that Alura survived with others in Argo City, a portion of Krypton that survived when the planet exploded, protected as it is by the mysterious “black rock” that came into play in the latest episode. Kara and Mon-El (played by Melissa Benoist and Chris Wood) make this shocking discovery in the course of pursuing a last-ditch fix for their Reign problem back on Earth.

Will Alura be in a distinctly qualified position to help? TVLine was on set, at the VanDusen Botanical Garden in Vancouver, as Durance filmed the most unexpected mother/daughter reunion, which, while emotional, will not be without its complications…. 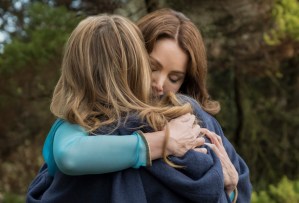 TVLINE | So, tell me about what you’re shooting today….
Well, today we are shooting a little scene called “Reunion Between Mom and Daughter.” Both had thought each other was lost, and then they find each other. Supergirl has come to this strange land which she discovers is Argo, and there’s momma peaking around the corner. [Gesturing to the lush, sunny botanical garden] This is Argo.

TVLINE | [Looking around] I thought it would be darker.
You would think!

TVLINE | Is the “black rock” generating a “bubble”? A dome of sorts?
Well, I don’t know if you hit anything if you touch it. But the one person that tried to get out died on the other side, so we stay in this beautiful bubble, isolated. And of course that’s why we can’t communicate and [Kara] didn’t pick up on us.

TVLINE | What’s funny is when I first heard about this, I was like, “How great for Kara that her mom’s alive!” But then the flip-side dawned on me, that Alura never knew what became of Kara.
No, she didn’t, and so this is the first time that you see Alura discovering the fact that her daughter did in fact live. She had lost everyone else and here she has this miracle, her daughter’s come back into her life. There is a little bit of, “Oops, it kind of worked out for us — we saved ourselves! — but I’d already sent you off in a pod.” 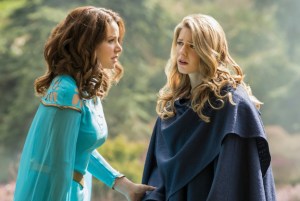 TVLINE | But since you had legit reasons for not being able to get in touch with Kara, we don’t have to play all of that, “Why didn’t tell me?!” stuff.
That’s right. In the scene that we’re shooting today, there’s a little bit of the exposition to explain to everyone, because I do know that fans of this particular genre are very on top of it. They’re very loyal and we love them for that, and you have to be accountable for how things happen.

TVLINE | But other than that, the reunion is pure joy?
Pure joy and surprise, and then the unfolding of why Supergirl has come to see her mother and “Can her mother help her?” It’s kind of touch-and-go as to whether Alura can actually do anything to help. Supergirl has to plead her case.

TVLINE | When you were first brought on to assume the role of Alura (originally played by Laura Benanti), did you know that this is where it was going? Or did you think you were just going to be doing the occasional dream sequence and hologram?
I knew that there was something else they had up their sleeves. They didn’t lay it out specifically for me, but when I met with them at the beginning of the season and they talked to me about it, they said, “We have this thing coming up at the end…. It’s going to be really great.” Then, as it is in television, they start to find where they’re going with their show, and all of a sudden I get to have a nice four-episode arc.

TVLINE | Do you find yourself playing an alive Alura any differently than previous iterations of her?
I would suppose the difference is there is a sense of “connectedness.”

TVLINE | Are you, say, 10 percent less “regal”?
Well, I didn’t think about doing it that way [Laughs], but it’s a happy instance that happens because when you’re working with people instead of by yourself on the green screen, you end up having more of that connectedness. When it was the hologram, there was purposefully no connection and you’re just purely an automaton – and that was actually quite challenging for me. This is the first time that I feel like I really get to embody a real person going through something quite beautiful and traumatic at the same time, so it’s been fun.

TVLINE | Is Alura, like, the queen of Argo City, the mayor…?
She works on the high council and has for many years, so she’s one of the leaders of Argo, which is quite fun.

TVLINE | How has it felt to wear the House of El emblem? I’m trying to remember, did you ever get to wear it for any crazy reason on the other show (Smallville)?
No. This was my first time, and it’s totally weird. But I just got a call that I’m getting outfitted for some leather, so I think that’s some foreshadowing Alura might be doing some ass-kickery. I think she gets to be a little bit badass, which is kind of nice!