What does it take to get Madam Secretary‘s Elizabeth McCord to realize that she, in fact, does want to run for President of the United States of America? Turns out, the threat of an impending nuclear attack will do the trick.

Sunday’s season finale of the CBS drama began with the unthinkable: The Pentagon warning President Dalton and his cabinet that Russia had launched multiple nuclear missiles that were on course to land all over the United States, “coast to coast, top to bottom,” as one Pentagon staffer put it. POTUS and his advisers had just minutes to decide whether to launch a counterattack; ultimately, the president greenlit the order.

All of this took place on a Saturday, so Elizabeth was at an arcade, playing skee-ball with her family, when she received the news that the literal end of the world as we know it was imminent. So while the McCord kids (and the rest of the world) went about their day, Elizabeth and Henry clung to each other and waited for nuclear war to begin.

Except it didn’t. The whole thing was a mistake resulting from a drill accidentally getting put into play without anyone at the Pentagon knowing it. Fortunately (and incredibly luckily), the situation was brought to light before American missiles were launched. In the aftermath, a relieved yet angry Elizabeth argued for nuclear de-escalation, saying that making such life-and-death choices in the space of a few minutes served no one well. 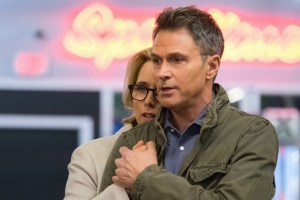 Dalton agreed with her. The Pentagon did not. After a discussion with Henry about how only popular opinion was going to get the government to change its nuclear stance, she realized that declassifying the documents about the near-miss — thereby alerting the American public to how close the entire country had come to annihilation — was the only way to achieve de-escalation. “Let’s scare the crap out of America,” she said… and it worked. A month later, the United States and Russia agreed to a treaty to take intercontinental ballistic missiles off of the hair-trigger alert system.

At the end of the hour, as they sat at the Lincoln Memorial, Elizabeth told Henry that the scare had reaffirmed her “faith in the process” of civic duty. But she worried that the next occupant of the Oval Office might come along and undo all of the foreign relations progress the Dalton administration had made. So… “When the time comes, I want to run for president,” she said. Henry said he’d happily support her candidacy — and that he’d known for a while that she’d eventually make the choice to try for the nation’s highest office.

TVLine talked with executive producers Lori McCreary and Barbara Hall about the Secretary of State’s huge decision and how it might begin to unfold in Season 5. Read on for their thoughts.

TVLINE | Elizabeth running for president is an idea that you’ve flirted with previously, but always backed away from. Why is now the right time to pull that trigger?
HALL | We hinted at it and we teased it some. We were really just trying to contemplate the idea ourselves. So we built into this season a couple moments where she at least couldn’t close the door on the possibility. And then, after this event, it just seemed to make sense… We realized what, she accomplished [getting rid of the hair-trigger system], it’s such an enormous thing, that she really invested in making sure it didn’t get undone. It seemed like an organic arrival at that point. And so, we just went with it.
MCCREARY | The personal stakes for her and the family, and then the world, that were on the shoulders of this small group — and realizing that she has a small voice there, and she might be able to have a bigger voice there in a different position — probably also pushed her to make that decision. 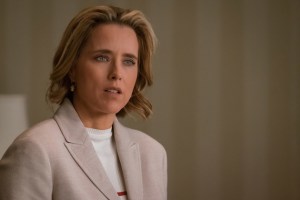 TVLINE | We’re two years into Dalton’s second term. So if time continues unfolding in the fashion that it has, it’s not going to be like we’re going to see Elizabeth on the campaign trail in the next season, correct?
HALL | That’s right. We want to do it in as much real time as possible. This would actually be the point where you’d have to make the decision to at least start investigating what’s involved in running. We can talk about if we’ll ever want to do a time-jump. A big point of our show is that we like to show process. So why not pull the curtain back on what that process looks like, and have fun with that arc for a couple seasons?
MCCREARY | Elizabeth isn’t telling the whole American audience. She’s really only letting Henry in on that she wants to run, so, we’ll have a little time.
HALL | The current plan is to just reveal process as much as we can and have fun with that. At some point, we might feel it’s time for a time-jump, and we also reserve the right — or she reserves the right to change her mind once she finds out what’s involved. Butwe really just want to take her on the journey right now of saying, “I’m in, I want to run for president,” and see what that looks like for her.
MCCREARY | For fans of the show, there will be some echoes of things they’ve seen when Dalton was running, and ran as an Independent, and the kind of things that his chief of staff, Russell Jackson, was warning him about. The echoes of that will probably resound over the next couple seasons as Elizabeth runs into similar circumstances. She’s so non-political, she’s going to have to start thinking about that. At least, whoever’s going to help her think about running will want her to think about that.

TVLINE | Let’s talk about her potential opponents. The current vice president has designs on the office.
MCCREARY | Yes, we have teed that up. Probably she won’t be the only person, so that is part of the process, too: If you take [Elizabeth] into a primary, what does that look like?

TVLINE | And I can’t imagine that Sen. Morejon wouldn’t be all up in this in some way.
HALL | [Laughs] He’ll be a presence for sure.

TVLINE | I love that Henry knew before she did. Do you think that he realizes the reality of what’s ahead as the spouse of a candidate? Or are they both looking at this with rose-colored glasses, at least at this early point?
HALL | I think that they have the same kind of glasses they had on when she decided to seek the Secretary of State’s job, which is, “Well, let’s see what this.” Ahe felt then, “I have to try to do this,” and they are a strong couple… wherever it takes them, they’re together in it. It’s a different sort of adventure that they’re embarking on, and I don’t think even they understand what’s ahead of them, because how can you know before you start?

Grade the finale via the poll below, then hit the comments with your thoughts on a potential McCord presidency!