The following contains the very last spoiler from ABC’s Once Upon a Time, which aired its series finale on Friday night.

It’s good to be queen. But even better to be The Good Queen.

ABC’s Once Upon a Time closed the book on its seven-season run by bestowing upon the formerly evil queen a new, much nicer title that put her in charge of the realms now united within and around Storybrooke, and reflects the character’s most incredible journey. 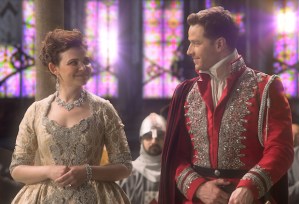 “She’s come full circle!” observed Lana Parrilla in her final interview with TVLine. And the significance of the moment, as anyone with eyes could see upon watching the finale’s closing moments, was far from lost on the cast on hand. “It’s funny because Ginny [Goodwin] was literally crying, every take – even when the camera wasn’t on her,” Parrilla said of the coronation ceremony led by Snow White and Prince Charming (with finally grown-ish son Neal at their side). “She was like, ‘Look how far we’ve come! And look how far Regina has come!”

“It is what her character deserves,” attests Josh Dallas, who plays Charming and like Goodwin returned to Once for the first time since last year’s finale. “It’s taken all this time for her to evolve to this point, after hearing the things that Snow has been telling her all these years, about hope and about happy endings. The choices you make define the character that you are, and it takes people a different amount of time to come to that conclusion, but [Regina] has, and it’s a really satisfying ending – not only for Regina, but for Snow and Charming too, as they honor her.”

“Ultimately that’s what the show is about — the hope that, no matter what we’ve all been through in life, we can be redeemed through better choices,” Morrison notes. “[Regina] of all the characters has had an incredible journey, from the darkest of the dark to the lightest of the light, and she has really embraced the light side of life. I think it’s really a beautiful message, to have the show end that way.”

What did you think of Regina being elected The Good Queen?