Peter Griffin has had his share of religious experiences over the years — remember when he inspired Jesus’ big comeback in ’08? — but nothing compares to Sunday’s Family Guy season finale (Fox, 9/8c).

The episode — which, of course, is titled “Are You There, God? It’s Me, Peter” — finds Peter hero slipping into a coma, meeting his maker face-to-face and asking him “some of life’s tough questions.”

“He inquires about the meaning of life, and his own life, and he gets interesting answers,” executive producer Rich Appel tells TVLine. “He learns a lot about himself. Seth plays God and Peter.”

And as you can see in TVLine’s exclusive first look below, the two get along swimmingly: 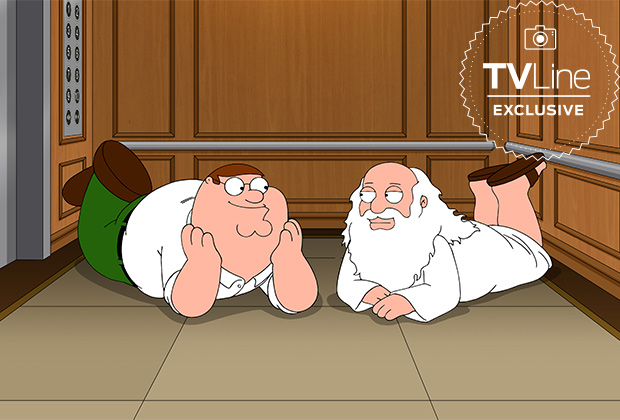 If you think about it, Season 16 has been a particularly wild ride for the Griffins and their associates: Quagmire lost his penis in a freak accident on the high seas, Peter’s millennial friend Hammer died in his arms, Stewie was revealed to be faking his fake British accent, Rupert was killed (then replaced) and Brian got kicked out of the house… for a few weeks, at least.

Your thoughts on Sunday’s divine discussion? Drop ’em in a comment below.