The day we’ve all been waiting for is here, at last, Supernatural fans: Dean finally agreed to become Michael’s vessel during Thursday’s Season 13 finale.

Let’s recap how this eight-seasons-in-the-making twist came to be: After Jack has a nightmare, Dean tells him that he’s strong, and nobody’s perfect, but every day, we can get better. Then he caps off his pep talk with these sweet words: “You’re family, kid, and we look out after our own.”

But then Jack’s other dad shows up and preys on his son’s insecurities. “You need me,” Lucifer says. “Because we’re blood. And we’re not human, no matter how much we pretend to be.” He convinces Jack to leave Earth for an intergalactic father-son adventure — “Like Star Wars?” Jack excitedly asks — but first, Lucifer needs to do something for Jack: resurrect apocalypse world’s Maggie, who was killed earlier.

Meanwhile, Michael breaks into the Men of Letters bunker like it’s the Team Arrow bunker and attacks Dean, Sam and Castiel. He wants to take this world, too, and purge it of sin. As Michael is pummeling Dean, Sam prays to Jack, who comes to the rescue. “You hurt my family!” he exclaims, reducing Michael to a bleeding mess. 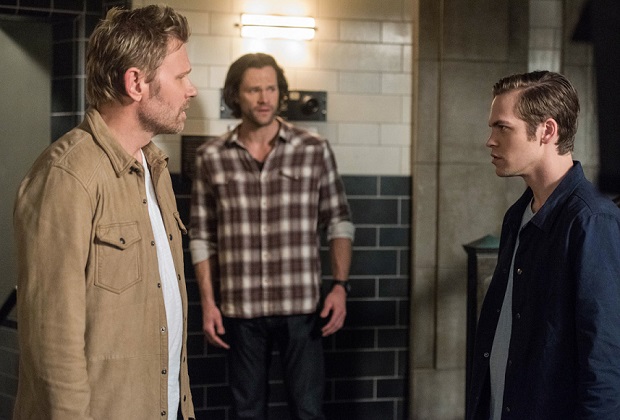 When the archangel yells at Lucifer that they had a deal, Dean spills the beans to Jack about his bio dad’s dirty dealings: Lucifer gets Jack, and Michael gets everything else. Now Jack understands his father’s burning desire to leave the planet Michael intends to destroy. He then compels Lucifer — oh, that’s one of his powers? — into confessing that he killed Maggie. “You’re not my father. You’re a monster,” Jack declares. As you can imagine, Lucifer is angry and not above siphoning grace from his own son so he can power up. Just as Lucifer is about to attack Jack, Sam intervenes and all three are transported to a church.

Michael declares that the devil won. There’s no way he can beat Lucifer now that he’s so supercharged. But Dean has an idea that goes all the way back to Season 5: What if Michael had his sword, aka the hunter as his perfect vessel? However, if they’re going to do this, Dean has some conditions: “This is a one-time deal. I’m in charge. You’re the engine, but I’m behind the wheel.”

Back at the church, Lucifer presents a twisted deal of his own: Either Jack kills Sam or vice versa, or Lucifer will murder all life in the universe. Sam picks up the blade… and hands it to Jack. “Kill me,” the younger Winchester pleads. Jack responds, “I love you. I love you, all,” and then turns the blade on himself. Just as he begins to stab himself, Dean shows up, with Michael’s glorious wings and all, and starts an epic battle with Lucifer that (finally?) ends in the devil’s demise. “Holy crap,” Dean marvels alongside Sam and Jack. “We did it.” 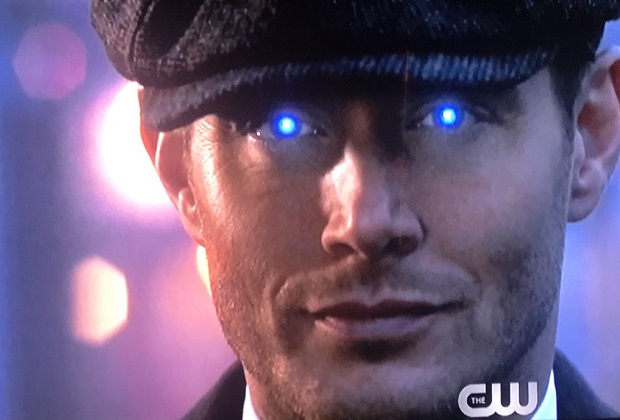 The victory lap is cut short, though, as Michael reneges on his deal and takes over Dean’s body. “Thanks for the suit,” he says before disappearing… and going clothes shopping for a new vintage wardrobe? And with that, we end the season on Dean/Michael’s blue eyes .

Supernatural fans, what did you think of the season ender? Grade it via the poll below, then hit the comments!