Following an Emmy Award-worthy introduction from Stephen Colbert (“Okurrr?“), the remaining six queens on Thursday’s Drag Race buckled in for an evening of butts, bots and Boniva.

MINI CHALLENGE: PANTS DOWN, BOTTOMS UP

In a game very true to its name, this week’s mini challenge was basically Memory — only instead of matching words or pictures, the queens picked various shirtless gentlemen to drop their pants in the hopes of matching pairs of undies. It was basically just an excuse to check out some butts and yell stuff like “Do you you want fries with that shake?”

This week’s main event transported us to Breastworld, a “magical world full of drag queen robots.” Having won the mini challenge, Aquaria was tasked with assigning parts to the girls, but she surprised them — especially Eureka — by playing nice and letting everyone pick their own roles. I’m not going to lie, I appreciate and respect Aquaria’s subtle mind games. She knows what she’s doing.

Like most of the acting challenges on this show, Breastworld was largely a disaster. Miz Cracker spent most of the challenge messing up and berating herself for it, while Eureka — in a truly ironic twist — had difficulty acting “bigger.” Her website is literally EurekaTheElephantQueen.com.

Some positives: I actually thought Aquaria turned in a pretty decent performance as the malfunctioning robot Dyslexa, and Monet X Change kept things interesting — while keeping the other queens on their toes.

This week’s runway challenge was a little more cerebral than most, as each queen looked five decades into the future and imagined how their lives will unfold. Some queens, like Miz Cracker, envisioned themselves evolving into sophisticated Miranda Priestly types, while poor Monet has apparently resigned herself to the idea that she’ll end up a damn mess.

Kameron Michaels, on the other hand, saw herself somewhere in the middle. Fabulous? Sure. But also falling to pieces? Absolutely. She was basically Yetta from The Nanny, which was kind of ironic, since Eureka was literally called out for looking like Renee Taylor (aka Sylvia Fine) by RuPaul on the runway: 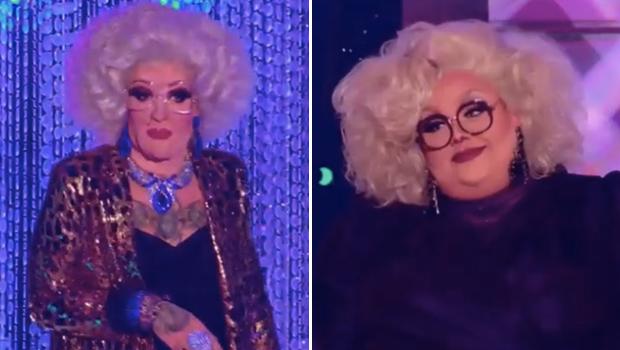 Unfortunately, retirement home realness wasn’t enough to make up for Kameron’s underwhelming performance in Breastworld; she found herself in the bottom two, facing off against Eureka, a similarly disappointing queen (including a “meh” runway look, which Ross Mathews rightly described as “Paula Deen dressed like a witch”).

Let me just say this: Kameron and Eureka may have underperformed in this week’s challenges, but they brought it to their battle, set to the tune of Patti LaBelle’s “New Attitude.” Like, synchronized splits? What is this, gay Olympics? (I’m kidding — of course it is.) But I called this one for Eureka the minute she started twerking that big butt across the ground.

And I was right… sort of. Eureka was, indeed, told to stay in the competition — but so was Kameron! That’s right, friends, no one went home crying tonight.

Your thoughts on this week’s non-elimination? Drop ’em in a comment below.