The following contains spoilers from the Season 6 finale of The CW’s Arrow.

A year ago on Arrow, an island blew up. But in the Season 6 finale, it was Oliver’s life as we know it that went kaboom.

Launching a final assault on Ricardo Diaz with help from the FBI as well as “help” from Anatoly, Team Arrow emerged with a decent-sized W in the end. The army of goons that had seized Star City was vanquished and the list of corrupt officials secured. Diaz however may live to yell at us another day, seeing as Laurel “ended” his final showdown with Oliver with a well-intended but ultimately misguided sonic scream, and he later was seen, bruised and waterlogged, watching Oliver on TV.

(Could Diaz return as a Season 7 threat? Exiting Arrow co-showrunner Marc Guggenheim previously told TVLine that the finale’s mention of the Longbow Hunters, a criminal gang led by Diaz’s counterpart in DC Comics lore, was very much about “planting a flag” for bigger Season 7 developments.)

Alas, Team Arrow’s qualified victory came at a great cost. For one, Quentin Lance, played by exiting original cast member Paul Blackthorne, died a hero, taking a bullet from Diaz meant for his daughter Laurel’s doppelganger. (Cue hospital visit from Caity Lotz’s Sara, and one compelling “sisters” reunion.) Oliver meanwhile had promised FBI Agent Watson that in trade for the feds’ back-up (and immunity for the rest of the team, Green Arrow Diggle included), he would publicly out himself as the infamous vigilante and thus serve a life sentence behind bars — which came as news to wife Felicity!

Here, Guggenheim talks about the difficult decision to lance Quentin and how Oliver’s deal with the feds might do damage to his marriage. (Coming soon to TVLine: series star Stephen Amell himself also weighs in on the finale’s major developments, including what it means for Oliver/Felicity.) 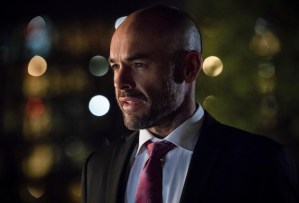 TVLINE | First things first, talk about the decision to kill Lance versus wound him, send him off to live with Donna, having him decided he’s “too old for this s–t”….
Look, it’s always hard. Paul’s a wonderful actor and a wonderful human being. [Regarding] the decision to kill versus maim, this show has always been a show that has real consequences — even when we had the Lazarus Pit and and even with time travel and parallel Earths. Maiming always feels like a cop-out to me, especially on a show like this one. [Arrowverse executive producer] Greg Berlanti always says the show has a Game of Thrones element to it in that no one is ever really safe. And while I think while we could have maimed Lance and sent him off to live with Donna, like you said — and that was discussed — I don’t think it would have been true to the spirit of the show, which has never really done that as a general rule. But it was hard.

TVLINE | I saw Paul just the other night and he described Lance’s exit as “beautiful.”
He’s terrific; by the way, a total class act. When [exiting co-showrunner] Wendy [Mericle] and I sat down with him to give him the news, he couldn’t have been more gracious about it. I think his performance in the finale is among the best he’s ever given on the show. It is a very beautiful, poignant exit for this character. He has a scene with Stephen [Amell] that is just next-level stuff. If you’re going to kill off a character, I do feel like this was the way to do it.

TVLINE | I’m sitting here trying to figure out how Oliver will ever resume doing what he likes to do, given how the finale ends. He’s outed, he’s behind bars…. The only think I can think of is the government needs him to continue being a vigilante, so they spring him or something…?
This is the beauty part of me not showrunning anymore! No, I’m just kidding. There is a plan in place. We always try very hard never to take a leap without knowing how we’re going to stick the landing, so as much as I would love to joke, “OK guys, have fun, I’m out of here!,” there is a plan. We know exactly how things are going to work in prison, how things will resolve themselves…. I don’t think it’s a spoiler to say that Oliver won’t remain in prison for the remainder of the series; that would be silly. He’ll get out at some point, and the circumstances under which that happens… there’s a really cool plan in place for. So, stay tuned!

TVLINE | Felicity tried to get Oliver to renege on his deal with the FBI and escape custody, but he insisted on doing what’s right, guaranteeing William at least one parent. Will she be fully understanding of that, or is she a bit bitter?
I wouldn’t say bitter; but I would say that Oliver is going to have some work to do. This was a momentous decision that affects not only her but their son, and at the end of the day he didn’t consult her. Oliver says in the finale, “There wasn’t enough time,” but if I were Felicity I would quibble with that. There were plenty of moments where Oliver was talking to people, saying hid good-byes…. Felicity I think would be well within her rights to say, “Why didn’t you take some of that screen time talking to me about it?” Obviously it will be up to Beth [Schwartz] and the writers to decide which way to go here, but my thinking about the reason he didn’t [consult with Felicity] was because he knew she would talk him out of it. 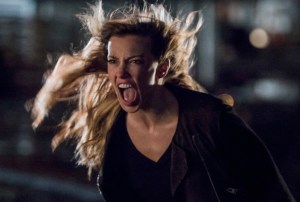 TVLINE | Lastly, two bits of housekeeping: Is Katie Cassidy back as a series regular next season?
Yes, she is.

TVLINE | And might there be a larger-than-usual time jump when the show returns in the fall?
No. No, it will be the typical six months or so.