Shocker: It turns out vampire Nazis are just as evil as their human counterparts — maybe even more so.

That’s my big takeaway from Wednesday’s episode of The Originals, which revealed Klaus and Elijah’s adventures in 1930s Germany — and a new/old enemy of the Mikaelsons. The mustachio’d villain went by the name of August, and his interests were threefold: discussing art, playing music and carrying out supernatural genocide. What’s worse, his daughter turned out to be a familiar face, one whose name rhymes with Shmantoinette.

In present day Manosque, Elijah was understandably displeased when his fiancée revealed that they’ve actually known each other for nearly a century. So when she informed him that it was time to move away, to escape her father’s followers who have been keeping tabs on her, he didn’t exactly rush to the computer and book a trip for two through Expedia. Or whatever vampires use when they’re too lazy to just go directly to an airline’s website.

Back in New Orleans, a bloody investigation — as if Klaus knows any other kind — revealed that Greta, still a faithful follower of August’s twisted teachings, was among the ringleaders in Hayley’s kidnapping. And she was willing to return the mother of Klaus’ child to him on one condition: Hope had to bind her werewolf side so that no more hybrids could be born. (I guess the silver lining there is that Hayley’s… still alive?) 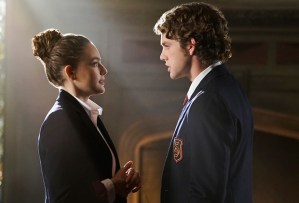 Knowing Klaus would never allow Hope to sacrifice any part of who she is, Marcel secretly relayed Greta’s demands to Freya, who reluctantly offered her niece the option. After hearing about how painful the transformation actually is — you know, broken bones and all that — Hope jumped at the chance to be rid of her wolfy nature. After sneaking a kiss with Roman (just in case the spell killed her or whatever!), Hope and Freya began the binding ceremony… only to be interrupted by a vengeful Klaus.

Speaking of Klaus’ vengeance, it turns out he’s responsible for August’s death — as well as the deaths of about a dozen of his ilk. He did, however, agree to spare August’s daughter (already ID’d as Antoinette), wife (who turned out to be Greta) and son (none other than Roman!). “I gifted them shame,” Klaus relayed to Marcel, calling himself “the match that lit the fuse.”

* Even though I knew this episode was taking us back to the ’30s, I still didn’t expect that little mention of Stefan — yes, he of Vampire Diaries fame — from Klaus when he told Elijah about Rebekah’s shenanigans in Chicago. I also got sad when Klaus said he “didn’t have a chance” to kill Stefan, “but eternity is long and I have an excellent memory.” (R.I.P., Hero Hair.)

* My ears also perked up when Hope’s mentioned Alaric, which I know is ridiculous, since he’s already been on this show — and recently. In other news, can we talk about how Matt Davis will have been the only actor to appear on all three shows in the TVD-verse when Legacies premieres? Who’d have thunk it.

* Maybe it was all the flashbacks, but this whole episode got me thinking about this franchise’s vast history. Like, it kind of blows my mind that Klaus, Freya and Hope were all in Mystic Falls this week like it was no big deal. Mystic Falls!

Your thoughts on Wednesday’s Originals? Drop ’em in a comment below.