Get your fascinators ready: A few days before Prince Harry and Suits actress Meghan Markle get hitched, Lifetime will air Harry & Meghan: A Royal Romance, the cabler’s fictionalized account of the couple’s “fairytale” courtship.

Ahead of Harry & Meghan‘s premiere Sunday (8/7c), TVLine got a few minutes with the fictional bride-to-be, aka Midnight, Texas‘ Parisa Fitz-Henley. Read on for her insight on the royal lovebirds, co-star Murray Fraser (Victoria) and what it felt like to slip into Markle’s now-iconic threads. 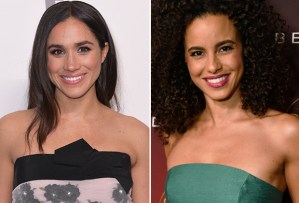 TVLINE | You and Meghan have a similar look, you’re around the same age. When you were cast in the film, the first thing I wondered was whether you had both been up for the same roles. Were you? Did you ever see her at auditions?
We probably were going out for the same things, but right around the time she was gaining some traction in her work, I went to school and then I joined a community development project in the Caribbean. I was out of acting completely for a while. So I think we were like two ships passing in the night.

TVLINE | You’ve said that you didn’t really know Murray, who plays Harry, at all before your chemistry test.
It was, “Nice to meet you.” That was it. “Oh hi, I’m Parisa.” 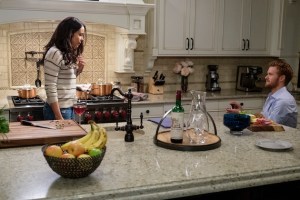 TVLINE | What kind of conversations did the two of you have about the fact that you’re playing real people, not fictional characters, who might someday see your portrayal of them?
Both of us are really adamant about treating these people as people and not playing titles or job descriptions. Murray is somebody who believes — and I share this belief — that we are all humans having very similar experiences underneath the circumstances of our lives. So we wanted to really get underneath the circumstances of their lives, look at the fullness of their experience as a daughter, as a son, as a person who’s working in the world. We wanted to look at them as whole beings.

So we had these conversations about that and really about supporting each other. We had lunch together right after the chemistry read and had a really easy, great, deep conversation right away and that just stuck throughout the production. The production was very, very fast. And so it required a lot of work. It was just nice that once in a while when there was time, we would take a walk and mull over what was coming. He was a great partner.

TVLINE | Was there a moment where you felt like you’d locked into who she is?
Never. [Laughs] No, never. As an artist, at this point in my career, I feel really fortunate to be in this place where I can at least trust my work. You hear other actors talk about their own insecurities around their work and just remember that lost of amazing people have insecurities, so don’t invest too much in them, and go back to work. [Laughs] That was kind of my feeling. I’m doing my thing and I’m approaching her as much as I can. And then I also have to trust the audience to do what they will with what they’re watching. 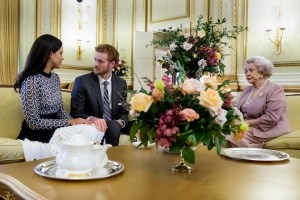 TVLINE | Meghan has become such a fashion icon. Talk to me about the clothes you got to wear in the movie.
There’s a lot of shopping and having replicas made of things, because you can’t find most of the things that she likes. If she so much as sniffs in the direction of a designer, everything sells out. We did our best to find or make replicas of things. She wears great clothes, classic, flattering clothes. It was really a pleasure to wear them.

TVLINE | Did you have a favorite?
I had two favorites. One is just her jeans and a white shirt, because that’s more me than probably anything else that she wears. And then there’s this beautiful blue-and-white dress that she wears when she’s meeting with the Queen that I just thought was really sweet and beautiful. Everybody was like, “That dress!”