By now, Fear the Walking Dead viewers know that it was no coincidence that John was reading Love Story when he made Morgan’s acquaintance; the sharpshooter is as hopeless a romantic as ever there was. And in Sunday’s beautiful, bittersweet “Laura,” we flashed back to the fateful day that he met Naomi… and forward to the last time he saw her. Read on, and see if your heart doesn’t swell a time or 10. 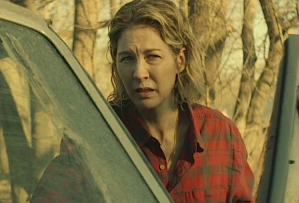 ‘GOOD NEWS IS IT’S NOT A BITE; THAT’S ABOUT AS GOOD NEWS AS YOU CAN EXPECT THESE DAYS’ | The hour opened with a snapshot of John’s post-apocalyptic day-to-day, which honestly, looked pretty terrific. His cabin on the river was quaint, and protected by a trench that kept floaters from wandering up to his door, and he had power, coffee, chickens, a VHS player and even one of those fish clocks that wakes you up by playing “Take Me to the River.” The one downside of the Scrabble enthusiast’s existence was that he was clearly lonely as hell. But that all changed the night that he heard a walker splashing around that turned out to be an injured Naomi. After treating her wound and letting her get some rest — oh, and leaving a caramel at her bedside just in case — he awakened the next morning to find her trying to steal his truck. Since it needed a new battery, he suggested that she stick around at least long enough for him to set her up with some food and water, and change the dressing on her wound.

That night, John served Naomi fish stew. “But I believe the French call it bouillabaisse,” he said, quickly apologizing for being his sweet self. “It’s been a while since I had company.” Finally, he thought to mention that his name was John. Since she didn’t offer her name, he decided, “You look like a Laura. Would Laura be an acceptable substitute [for your name] for now?” Though Laura — and since John does, let’s call her that for the rest of this recap — was determined to keep her host at arm’s length, he volunteered that he used to work at Humbug Gulch, doing trick-shooting to entertain the kiddies. Oh, and she could stay as long as she needed to, he added. But “I’ll be moving on as soon as I can,” she replied. Did I say she kept him at arm’s length? It might have been two arms’ length. Still, you could tell that she was slowly softening toward him. Yes, she balked when he took the sofa and put up a curtain so that she could have some privacy while she slept in bed — she wouldn’t be staying that long! However, she did commiserate with him about the “forever ago” before the world was turned into a high-traffic graveyard. 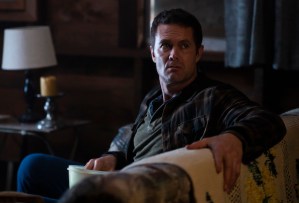 ‘YOUR NAME IS JOHN DORIE LIKE THE FISH AND YOU LIKE FISHING… OK’ | In the middle of the night, Laura found that, as John had told her, he couldn’t sleep. He was on the porch cleaning his sharpshooter pistols. The following morning, the arrival of two more wet, wet walkers in the river suggested to John that “there’s something amiss upriver.” Since it was Tuesday — his grocery day — he’d check it out on his way to the store. As Laura wanted to tag along, he encouraged her to trade her sneakers for a pair of boots, but she refused his offer of footwear. (Apparently, she’d be keeping him at arm’s length down to her toes!) As they paddled upriver, she learned that he’d actually been a police officer. So why hadn’t he brought his guns? “They cause more problems than they solve,” he said. Shortly, they discovered the “something amiss” that had sent so many walkers bobbing downstream — a car had driven off a bridge into the river, leaving behind a big gap in the guardrail.

At Bill’s store — the kinda place that looks at once cute and like it could be a location in a Texas Chainsaw Massacre sequel — Laura picked up the backpack that John recognized in last Sunday’s “Buried” and rearranged the medical supplies so that anyone coming in after them would have an easier time finding what they’d likely need. (And that right there told us everything that we needed to know about the kind of person Naomi is. And I say “is” because I refuse to believe that she’s dead!) After John picked up a new movie — and quirkily signed it out at the rental counter — he and Laura patched up the bridge and headed home. That evening, she got up from bed to get a glass of water and ended up joining him as he watched his flick du jour. When he suggested adding some of the Black Jacks that she’d found at Bill’s to his butterscotch and caramel brittle, she even smiled — a sight that was at once beautiful and heartbreaking to behold, knowing as we do that nothing good ever lasts in this world. Later, when John woke up mid-movie, Laura confessed so quietly that I wasn’t sure I’d even heard her correctly, “I lost my child,” and retreated behind her curtain. 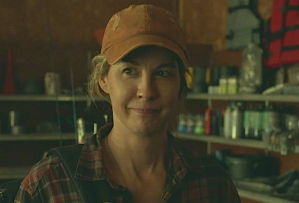 ‘I THINK I’M READY’ | The next day, Laura asked John to teach her to fish. Alas, this wasn’t, as he obviously hoped, a sign that she was considering sticking around. “It’ll come in handy out there,” she clarified. In fact, for every step closer to her that he got, she seemed to take two more steps back. For instance, if they had a good time playing Scrabble together, she had to offset that by continuing to refuse to take his boots. (Which frankly I’d have taken no matter what the second he mentioned there being snakes around!) Yet when at last she announced that it was time for her to go, she didn’t sound any happier about it than he looked. At least, since walkers were still floating up to say hi, she’d stay long enough to re-patch the guardrail with something stronger. “You helped me,” she said. “It’s the least I can do.” Later, as they were about to park a Jeep in front of the opening, he noticed that she’d taken one of his guns and went ballistic. They weren’t doing anyone any good in a box, she argued. Well, “I want ’em in a box,” he retorted. “I don’t want ’em out here!” To her horror, he wouldn’t even use the pistol when a walker nearly sank its gnarly teeth into him!

That night, Laura was still angry that he hadn’t fired — John could’ve been killed. “Better me than somebody else,” he said, giving her a hint that his reluctance to use the firearm had nothing to do with using it on the zombies and everything to do with using it, period. Shortly, she got him to reveal that as a cop, he’d tried to stop a robbery in progress by clipping the perp in the leg… only the perp had turned at just the wrong moment and ended up bleeding out. And, as it appeared Laura knew well from firsthand experience, “It doesn’t matter how many people say it’s not your fault; the only thing that matters is if you believe it.” Meanwhile, the walkers that were trapped in the vehicle in the river drew the attention of more walkers on the bridge, and through a crazy set of circumstances, a whole mess of ’em wound up plummeting into the water and heading for John’s. So when he and Laura woke up, it was like the cast of Night of the Living Dead was holding a reunion in their front yard! By the hardest, the two of them took out a bunch of the walkers, then Laura tumbled into the trench and was close to buried by the undead. Without a second thought, John used his sharpshooter skills to blast the hungry cadavers off of her in the nick of time! 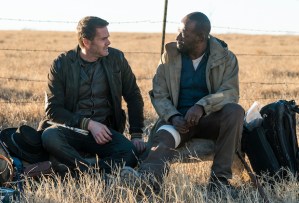 ‘I’M VERY, VERY LUCKY TO HAVE WASHED UP IN YOUR FRONT YARD’ | The next day, Laura told John, “You may not think you’re a hero, but I do — and an honorable person.” And even if they weren’t madly in love with one another by this point, I was most definitely madly in love with them as a couple. But that evening, John wouldn’t sit down and watch a movie with Laura. He wouldn’t even look at her. Why? “I love you,” he confessed. “I didn’t want you to know.” She asked why he didn’t want her to know, and he stated the obvious: “’Cause you’re gonna leave, and I don’t want you to.” But if she wanted to keep the cabin and be alone, he’d gladly go instead. Thing is, “I need you alive,” he explained, because “if you’re alive, this whole world feels alive.” With that, she kissed him, and as John told Morgan in the premiere, they acted on their feelings. Sadly, the following morning, Laura was gone. She’d finally traded her sneakers for his boots, and spelled out in Scrabble tiles, “I love you, too; I’m sorry,” but she was gone all the same.

From there, we flashed forward to the present, John still carrying those meaningful letters around with him as he told Morgan his story. “Maybe if I waited to tell her,” John wondered. Uh-uh, Morgan replied. “No waiting in this world… That’s how you lose people.” John felt stupid for thinking it, but he had believed they’d have a second chance. Perhaps they still would, offered Morgan, adding that Alicia, Lucy and Strand thought that the fight was all that remains. Only “we’re alive,” Morgan pointed out. “We are part of the world. Let’s not waste another second.” With that, the friends began the long walk to… well, that remained to be seen. So, what did you think of “Laura”? Am I alone in shipping John and Naomi? Could they be Fear TWD’s first truly great couple? Hit the comments.