Thursday’s episode of RuPaul’s Drag Race found the “lucky seven” remaining queens paying tribute to one of the only known creatures with more evolutionary forms than a Pokemon: Cher!

MINI CHALLENGE: SLAP OUT OF IT

Because America’s next drag superstar “needs to be able to take it as well as she can give it,” Ru tasked the remaining queens with crafting a “super sassy line” that would motivate her to “slap the crap” out of them. The queen with the most compelling reaction would be crowned the winner.

There were a few solid snarks in the bunch — Eureka’s “HD!” gave me flashbacks to the show’s low-res Logo days — but it was Asia O’Hara who emerged the victor of this week’s mini challenge… and not just because Ru felt bad for accidentally hitting her for real.

I was pleasantly surprised by the queens’ performances in the Cher musical, mostly because their rehearsal was such a damn mess. No one was excited to actually sing live, but some queens — particularly Eureka, who recalled a traumatic singing-related experience from her childhood — were simply not having it. Monet X Change wasn’t wrong for comparing her fellow contestants to the likes of Dennis Rodman, Madea and Mister Ed.

But by the power of Todrick Hall, those queens pulled it together come showtime. I was especially impressed with Kameron Michaels, who finally achieved a stand-out moment with her spot-on impression of ’60s Cher. As guest-judge Billy Eichner pointed out, she set the bar very high for her fellow Chers. I also enjoyed Monet’s take on ’70s Cher; not only did she nail the classic tongue-action and hair flips, but she was funny. (And an honorable mention goes to Eureka for rocking that “If I Could Turn Back Time” look.

On the flipside, several other queens (*cough* The Vixen *cough*) failed to embody the iconic singer at all. And the fact that she tried to argue that her Jackson 5 Cher look wasn’t recognizable — when all of the judges recognized it — was just a copout.

At the risk of pitting two rival queens against one another, my top two looks this week belonged to Aquaria (pictured left), who could have worn that to this year’s Catholic-themed Met Gala, and Miz Cracker (pictured right), who changed the way I’ll think about The Phantom of the Opera forever: 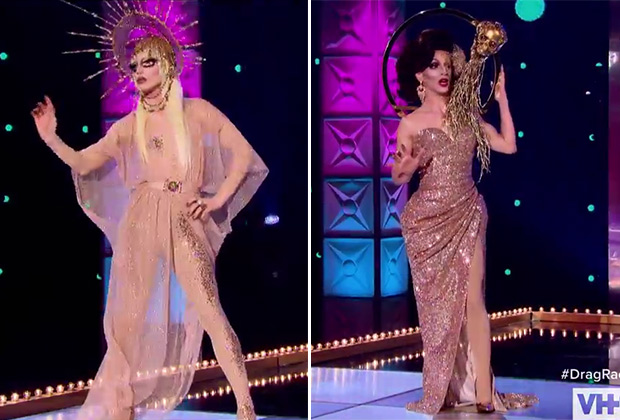 Was I expecting Kameron to be crowned this week’s winner? No. But did she deserve it? Absolutely. She was the most consistent contestant — try saying that three times fast — throughout this week’s competition, and I salute her.

This week’s sync-off pit The Vixen against Asia, which was unfortunate, since the two had just shared a heartwarming moment in the workroom. (Asia recognized that The Vixen’s anger comes from a place of hurt, that she still sees herself as “that kid struggling to prove she’s worthy of being heard and being loved.”)

Also unfortunate? The fact that the queens battled to the tune of Deee-Lite’s “Groove Is in the Heart,” rather than something by Cher. Nothing against the iconic ’90s house jam, but considering how much Drag Race loves a good theme, I’m just a little surprised.

Both queens put their entire body-ody-ody-odies into their routines, but in the end, it was The Vixen who was told to sashay away.

Your thoughts on this week’s elimination? Drop ’em in a comment below.