As “Diamond Earrings and a Pumpkin Head” begins, Christy’s celebrating five years of sobriety. After Nora presents her with a cake, she heads for the podium to thank all those who helped her reach this milestone — and to fess up to her recent mistakes, including gambling away Jill and Adam’s money and stranding Bonnie in a jail cell (as seen in the 9 pm episode). Now she’s taking extra shifts at the restaurant to pay back her debts.

Later, Bonnie, Jill, Wendy and Marjorie give Christy an early graduation gift: a pair of diamond earrings, which she ultimately loses at Rudy’s after-hours poker game. At her graduation party, she’s confronted about the missing jewelry, and Bonnie explodes: “You give me so much crap for every mistake I make,” she says. “You left me in jail, you gambled away my fiancé’s money, you gambled away Jill’s money, and now you lost our graduation present to you? You have a problem, and you don’t get to pout and bat your big blue eyes and ‘adorable’ your way out of it.” 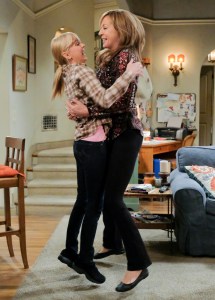 Later, Bonnie apologizes for blowing up at Christy but reiterates to her that she has a serious problem. “I’m scared for you,” Bonnie says. “I’ve seen [gambling] take people out just like drugs and drinking.” And so, the following night, Christy attends her first Gamblers Anonymous meeting.

Afterwards, Christy returns home and finds an important piece of mail waiting for her: It’s a letter telling her that she’s been accepted into law school! Mother and daughter are both ecstatic and begin jumping for joy. “Now all I need is $150,000 to pay for it,” Christy says as reality begins to set in. “One day at a time, honey!” Bonnie replies.

What did you think of Mom‘s Season 5 finale? Grade it via the following poll, then hit the comments to discuss.