Peter Griffin’s friend group has undergone a few changes over the years — remember when Cleveland took a four-year leave of absence to star in his own “spinoff”? — but Sunday’s Family Guy (Fox, 9/8c) shakes things up like never before.

I could beat around the bush all day, but I’ll cut straight to the point: Quagmire’s penis is going the way of Diane Simmons. The episode, titled “The Unkindest Cut,” includes a freak accident that severs his manhood, forcing him to “learn how to live without it.”

TVLine has an exclusive first look at the episode (above), as well as a shot of Quagmire receiving top-notch medical treatment from none other than Dr. Hartman: 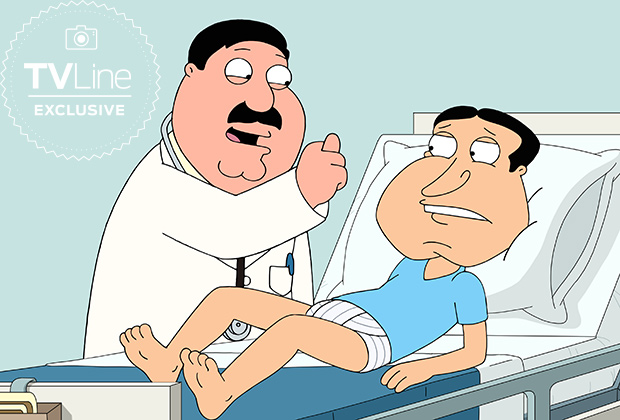 Elsewhere in the episode, Stewie and Brian go looking for Mort Goldman when they learn that a $10,000 reward is being offered for turning him in. Apparently he was involved in some sort of drug scam, but honestly, all I do is think about the Q-Man’s poor little guy.

Peruse the photo above, then drop a comment with your condolences for Quagmire’s giggity below.