Old foes reappeared and lives were lost in an action-packed Riverdale… but do we have to pour out a milkshake for one key character?

As Jughead rushes a wounded Fangs to the hospital, the rest of the Serpents express their sorrow over their fallen gang member by rioting all over town. (Never mind that Midge’s mom, not Reggie, was actually the one who shot Fangs.) Hiram can barely contain his glee, reassuring a rattled Hermione that “chaos is good for us.” In all that chaos, Reggie has vanished, and Archie recruits Kevin and Moose to help find him before the Serpents do. 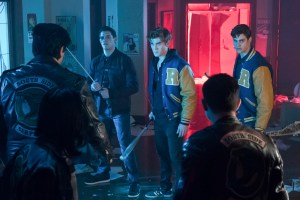 When they arrive at Riverdale High, they find Sweet Pea and his Serpent pals tearing the place apart. Even when Archie tells them Reggie wasn’t the shooter, they still want revenge on the Northside, and a bat-wielding Archie looks ready to rumble with a switchblade-holding Sweet Pea… when Principal Weatherbee bursts in to break up the fight. After a call from Pop saying that Reggie is at the diner, Archie heads down there — only to hear revving motorcycles in the parking lot. But it’s not the Serpents this time. Remember the Ghoulies? That nasty rival gang from earlier this season? Well, they’re back… and they’re ready to mess s—t up.

As Ghoulie leader Malachi twirls a Lucille-esque spiked bat, surrounded by extras from Mad Max: Fury Road, Archie decides to fight fire with fire, climbing to the roof of Pop’s and hurling Molotov cocktails at the Ghoulies. Sheriff Keller — or Former Sheriff Keller, rather — shows up with Fred and F.P., firing off a shotgun to scare off the Ghoulies. But Jughead receives an unwelcome blast from the past, too: He gets a call from his old pal Penny Peabody, who’s holding Toni hostage and has the Ghoulies backing her up. Jughead and Cheryl manage to pry away Toni, but Penny leaves Jughead with a warning: The Serpents either need to clear out of town, or take on the Ghoulies in an all-out brawl. 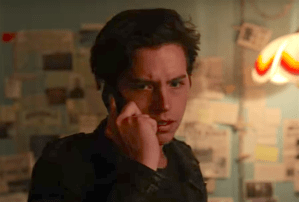 Despite Jughead’s protests, F.P. puts it to a vote, and the Serpents vote to fight — especially after learning Fangs died from his gunshot wound. F.P. fully realizes they’re outnumbered, but thinks they should “go down fighting.” Jughead has another idea, though: He phones Hiram directly, knowing that he’s the one backing Penny and the Ghoulies, and presents him with “a counter-offer.” He also calls Betty just to tell her he loves her. Uh-oh. Jughead hands himself over to Penny and the Ghoulies, sacrificing himself to save the rest of the Serpents. Malachi and the Ghoulies viciously pummel him as Penny informs him that his hero act is useless anyway: “Riverdale, as you know it, will cease to exist.”

By the time Archie and Betty get there, F.P. is emerging from the woods, cradling Jughead’s battered, unconscious body in his arms. His arm is mutilated, his Serpent tattoo sliced off. But he’s gonna be OK… right, guys? Right?!? 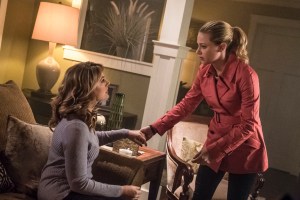 THE HOOD COMES OFF | So about those “Hal is the Black Hood” theories… turns out they’re right. The Hood is no match for Cheryl: He tries attacking her at Thistle House, but she dons a red hood and grabs her bow and arrow, hitting him square in the shoulder before he runs off. (Yeah!) Betty arrives home to find bloody handprints on the kitchen sink, and gets a call from F.P. alerting her that Hal’s been admitted to the ER. When she gets there, she finds the doctor murdered and Hal nowhere in sight. The hospital phone rings: It’s the Black Hood, telling her to come home to talk “so we can finish this.”

Back at home, Hal is setting up a film projector to play some old home movies for an unsuspecting Alice. In them, Hal is a boy, and we hear his mom saying his dad killed the Conway family because, as young Hal dutifully recites, “sinners have to die.” Hal then delivers a lot of convoluted family history, but really, it boils down to this: Yes, he manipulated Mr. Svenson — aka the Conway boy — into posing as the Black Hood, and yes, he is the real Black Hood. (The shooter at the debate was a copycat.) Betty’s speech inspired him to cleanse the town of sinners, and he wants Alice to record his confession because “I want everyone to understand… when they find us.” Yikes.

Alice thinks fast and starts taunting Hal, calling him a “mama’s boy” and telling him F.P. is more man than he is, distracting him so Betty can grab a fireplace shovel and whack Hal over the head with it. Sheriff Keller hauls Hal away in handcuffs, and Betty explains to Archie that her dad was the Black Hood all along. But wait, Archie just had a fistfight with the Black Hood at his house, and the Hood shot Fred in the chest — luckily, he was wearing a bulletproof vest — before fleeing. Exactly how many copycats do we have out there?

* After a fight with Hermione, Veronica snooped through her dad’s things and found a folder marked “October Surprise,” with photos of Hermione and Fred kissing! (Hermione knew, and figured the scandal would hurt Fred more than her.) But the real surprise came when Poppa Poutine’s son Small Fry (hee hee) came looking for revenge on Hiram and found Hermione and Veronica home alone. He killed their bodyguard Andre and tried to kill them, too, before Hermione shot him dead. Hiram came home to find his wife and daughter drinking wine, and a dead body in the study: “It’s your mess, Daddy. You clean it up.”

* Anyone else get whiplash from trying to keep up with the one thousand plot developments this episode threw at us? I literally wrote in my notes: “TOO MUCH IS HAPPENING.”

* So if Hal is the real Black Hood, who was the shooter at the debate? And who just shot Fred (again)? Was Hal coordinating these attacks… or did Hiram hire a copycat to stir up more chaos? And wouldn’t Archie recognize the eyes of Betty’s dad — who has lived next door all his life — as the Black Hood’s?

* Seriously, though, Red Archer Cheryl is a total badass. Can we get her a cameo on Arrow?

* Quote of the Week is a dead heat between Ronnie’s “Are you and Daddy trying to turn Riverdale into Gotham City?” and Kevin’s “Hot Riverdale dads to the rescue!”